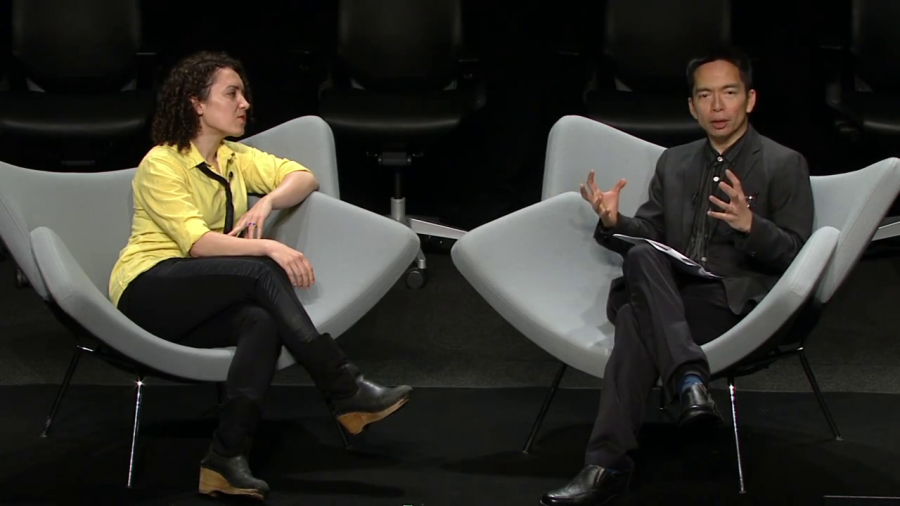 John Maeda: Next up I’d like to bring onto the stage Maria Popova at the end of this ses­sion. Maria, thank you. Please sit down. So, how many peo­ple know or have touched a Brain Pickings piece of con­tent? See, here you’re among your friends. It’s nice. And you’re color-coordinated.

If you’ve stud­ied Maria’s work, it’s real­ly gone counter to any kind of writ­ing project. It has­n’t gone ​“viral” in that way. It’s going to become part of our cul­ture, I believe. And in many sens­es, the same way that Paola [Antonelli], through her abil­i­ty to see the world can real­ly be a one-person insti­tu­tion, I see what Maria’s done is make an insti­tu­tion real­ly out of your curios­i­ty and fascination.

Maeda: It’s real, man. So, I just want to note, I love when you were talk­ing about writ­ing the oth­er day. People think writ­ing just hap­pens, and there’s research­ing, too. Can you talk about how it isn’t as easy as sit­ting down and…typing away? Can you talk a bit about that, your process?

Popova: Well, I think read­ing and writ­ing are real­ly two forms of the same act, which is a dis­course with one’s own mind, and ide­al­ly a dis­course with anoth­er mind. As a read­er it’s the author’s, and as a writer it’s the read­er’s, you know. But the two sort of feed into each oth­er, and for me writ­ing is just a record of my own becoming.

So, Brain Pickings, which freak­ish­ly enough turns eight today, October 23rd. It’s the eighth birth­day. So for eight years— [applause] Thank you. Totally unplanned. I real­ized this yes­ter­day as we were dri­ving up. But because it’s a record of my effort to under­stand myself, there is no divide between the read­ing and the writ­ing. It’s all sort of this flu­id way of sense-making, essen­tial­ly. Which I think most writ­ers do. It’s sort of an act of think­ing in pub­lic, I guess.

Maeda: Nice. And because you were think­ing in pub­lic, and you were able to real­ly archi­tect how that could become your way of life as a sin­gle sole busi­nessper­son, essen­tial­ly, on the Internet, I was notic­ing how the Great Discontent people—

Popova: I love them.

Maeda: —have made their own self-publishing ven­ture. Can you talk a bit about this? Is this a move­ment? Is this hap­pen­ing all over the place, or…

Popova: So, I get a lit­tle antsy when we talk about self-publishing as a sort of entre­pre­neur­ship thing, because I think before you can pub­lish some­thing you have to have some­thing to say. That is, some­thing to care about enough and to think about in pub­lic, and then that becomes the thing that you publish.

And what makes The Great Discontent— How many of guys know The Great Discontent? Not many. They do won­der­ful, pret­ty in-depth inter­views with peo­ple in cre­ative cul­ture, and very thought­ful, and it’s a very sort of min­i­mal­ist project. But it’s a hus­band and wife duo, very young, and they just do it because they give a shit. They care enough to do this in pub­lic, and they’ve been doing it for free since they start­ed. And it grew a fol­low­ing, and they’ve inter­viewed— You know, they recent­ly inter­viewed John, whose inter­view was amaz­ing. They’ve inter­viewed every impor­tant per­son in design and cre­ative cul­ture that I can think of, you know, cur­rent­ly alive, obviously.

And the thing is with self-publishing, it needs to come from this place of giveashit­ness in order for it to be suc­cess­ful, right. Because oth­er­wise it’s sort of shoot­ing for an out­come with­out hav­ing the sub­stance that pro­pels it.

Maeda: You know, I’ve described Maria’s work as a kind of a one-person Harvard in how she is mak­ing the lib­er­al arts excit­ing for every­body in a very demo­c­ra­t­ic way. And I like ​“giveashit­ness.” Maybe Erin [McKean], can you add that to the lex­i­con? Will prob­a­bly be the meme today. Thank you, Erin.

I want to note also, and I thank Maria for her con­tri­bu­tions to the con­fer­ence. Oftentimes you’ll have con­fer­ences that add dif­fer­ent video seg­ments. And I was hop­ing we could give give more of a shit about it. And I asked Maria to help us with that. So she hand-selected a lot of these lit­tle video vignettes that you’ll be see­ing in the con­fer­ence. So, can you please thank Maria for that extra effort for all of us.

Popova: And can I just debunk some­thing that Linda said ear­li­er about sleep?

Popova: Sleep is so impor­tant. I sleep reli­gious­ly. I think we live in a cul­ture where the abil­i­ty to get by on lit­tle sleep is some sort of tes­ta­ment to work eth­ic. But that’s so tox­ic. It’s a total fail­ure of self-respect not to sleep. It’s not a badge of hon­or, you know. So, anyway.

Maeda: Give a shit, and get some sleep. And let’s go to break. Thank you guys.