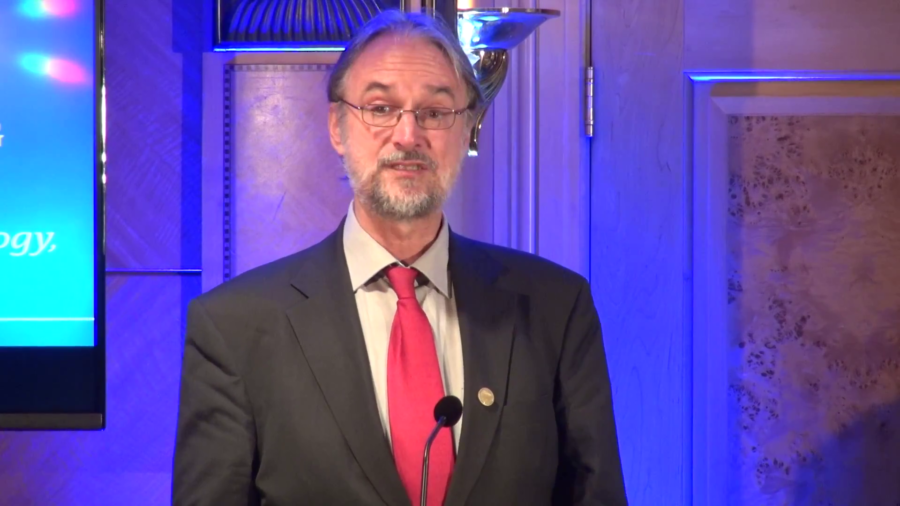 Karlheinz Brandenburg: So, thank you very much. Distinguished guests, ladies and gen­tle­men, I’m stand­ing here but… Okay, that’s the usu­al speech but I have to do it, I’m stand­ing here for a num­ber of oth­ers. Like is usu­al in sci­ence of course, stand­ing on the shoul­ders of oth­ers. There was a lot of oth­er work. But there were a lot of oth­er peo­ple involved in that. MP3 is a nick­name today used for MPEG Audio Layer III, and that’s a stan­dard issued by the ISO/IEC sub­group called MPEG, Moving Picture Experts Group. So, you know that, and you know that there are lots of peo­ple who have a say of what the stan­dard will be.

But before becom­ing a stan­dard, of course, there was tech­nol­o­gy to be built, so I have to thank my for­mer boss­es. Professor Seitzer, who in the 70s had the idea that it should be pos­si­ble to send audio over phone lines, over ISDN. And at that time he was told by a patent exam­in­er, ​“No no. According to the state of the art this is impos­si­ble.” So he tried, and had to find a PhD stu­dent who would try, and luck­i­ly I was around. And Professor Gerhäuser, who lat­er led the group at Fraunhofer to do all this work. The chairs of the stan­dards group, Leonardo Chiariglione the con­ven­er of MPEG. Professor Musmann and Professor Noll lat­er on, who chaired the audio group.

But that’s just the for­mal part. There’s a lot of peo­ple’s ideas in there. And yes, there’s some­body in the US who had very sim­i­lar ideas. He did his patent appli­ca­tion a lit­tle bit too late. But oth­er­wise, we worked togeth­er then, in fact. That’s Jim Johnston of AT&T—Bell Labs at that time. And he gets to be blamed for some of these ideas as well.

And there’s a whole group in Erlangen. Bernhard Grill, Jürgen Herre, Ernst Eberlein, Tomas Sporer, Harald Popp. (You see, I read so I don’t for­get too many of them, but there were more.) We had at some point a real team of peo­ple work­ing togeth­er in all aspects. We had peo­ple from oth­er com­pa­nies help­ing us a lot, like Bernd Edler from Hanover, and so on.

But that’s only one part to be able to devel­op such a tech­nol­o­gy. To do all the pol­i­tics in the stan­dards group, which was­n’t easy. And then in most peo­ple’s minds to be the sec­ond ones. Technology which was lead­ing technology-wise but too com­pli­cat­ed to be used right away. So we had a dif­fi­cult start time.

So thanks goes to every­body who helped to spread the tech­nol­o­gy. Okay, no. There’s one guy I won’t thank, and that’s the one who used a stolen cred­it card num­ber to buy our soft­ware and then spread it claim­ing it’s free. He did help us, but still I don’t thank him.

But I thank every­body who believed in the tech­nol­o­gy. We had our fans, and in the end MP3 real­ly helped to change the Internet by mak­ing music avail­able. By some means, peo­ple did­n’t like. Especially the music labels did­n’t like, and I have to say always no, I think musi­cians and labels should be paid for their work. But there was real­ly a grass­root move­ment of peo­ple who liked the tech­nol­o­gy and spread it, and I have to thank all these. MP3 is real­ly a suc­cess of the Internet as well. Not just that we used the emerg­ing ideas of writ­ing fre­quent­ly, asked ques­tions on net news, or spread­ing share­ware soft­ware in the ear­ly days. All that helped, so thanks to every­body. Thanks to the Internet Society to select this tech­nol­o­gy, and that’s it.