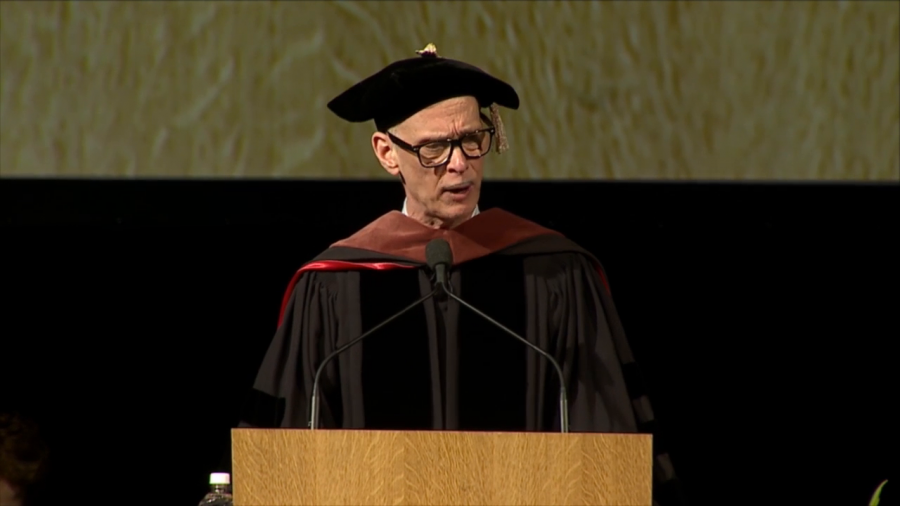 I should say right off that I am real­ly qual­i­fied to be your com­mence­ment speak­er. I was sus­pend­ed from high school, then kicked out of col­lege in the first mar­i­jua­na scan­dal ever on a uni­ver­si­ty cam­pus. I’ve been arrest­ed sev­er­al times. I’ve been known to dress in ludi­crous fash­ions. I’ve also built a career out of neg­a­tive reviews, and have been called the ​“Prince of Puke” by the press. And most recent­ly, a title I’m real­ly proud of, ​“The People’s Pervert.” I am hon­ored to be here today with my people.

Okay, I’m sup­posed to inspire you. How’s this? Somehow I’ve been able to make a liv­ing doing what I love best for fifty years with­out ever hav­ing to get a real job. ​“But how can you be so dis­ci­plined?” friends always ask when I tell them my job is to get up every day at 6 AM Monday to Friday and think up insane stuff. Easy. If I did­n’t work this hard for myself, I’d have to go work for some­body else. Plus, I can go to my office one room away from my bed­room in my own house dressed in my under­pants if I want to.

You’re lucky. When I went to school, my teach­ers dis­cour­aged every dream I ever had. I want­ed to be the filth­i­est per­son alive, but no school would let me. I bet RISD would’ve. You could pos­si­bly even make a snuff movie here and get an A+. Hopefully you have been taught nev­er to fear rejec­tion in the work­place. Remember, a ​“no” is free. Ask for the world, and pay no mind if you were ini­tial­ly turned down. A career in the arts is like a hitch­hik­ing trip. All you need is one per­son to say, ​“Get in,” and off you go. And then the con­fi­dence begins.

Of course play is equal­ly as impor­tant to your edu­ca­tion as work. And in the fine arts, play is work, isn’t it? What oth­er field allows you to deduct as busi­ness expens­es from your tax­es gang­ster rap, Gaspar Noé’s movies, even vin­tage porn as long as you use it for research. Remember, you must par­tic­i­pate in the cre­ative world you want to become part of. So what if you have tal­ent? Then what? You have to fig­ure out how to work your way inside. Keep up with what’s caus­ing chaos in your own field. If you’re a visu­al artist, go see the shows in the gal­leries that are fran­ti­cal­ly com­pet­ing to find the one bad neigh­bor­hood left in Manhattan to open up in.

Watch every movie that gets a neg­a­tive review in The New York Times and fig­ure out what the direc­tor did wrong. Read read read, watch peo­ple on the streets, spy, be nosy, eaves­drop. And as you get old­er, you’ll need youth spies that will keep you abreast of new music that nobody our age has heard or yet. Or body pierc­ing muti­la­tions that are becom­ing all the rage. Even bud­ding sexually-transmitted dis­ease you go to any length to avoid.

Never be like some of my gen­er­a­tion who say, ​“We had more fun in the six­ties.” No we did­n’t. The kids today who still live with their par­ents who haven’t seen them in months but leave food out­side their bed­room doors are hav­ing just as much fun shut­ting down the gov­ern­ment of for­eign coun­tries on their com­put­er as we did ban­ning the bomb.

Today may be the end of your juve­nile delin­quen­cy, but it should also be the first day of your new adult dis­obe­di­ence. These days, every­body wants to be an out­sider, polit­i­cal­ly cor­rect to a fault. That’s good. I hope you are work­ing to end racism, sex­ism, ageism, fatism. But is that enough? Isn’t being an out­sider sooo 2014? I mean, maybe it’s time to throw cau­tion to the wind, real­ly shake things up, and rein­vent your­self as a new ver­sion of your most dread­ed ene­my, the insid­er. Like I am. The final irony. A cre­ative­ly crazy per­son who final­ly gets pow­er. Think about it. I did­n’t change, soci­ety did. Who would have ever thought a top col­lege like RISD would invite a filth elder like myself to set an exam­ple to its stu­dents? See? There’s hope for everybody.

You need to pre­pare sneak attacks on soci­ety. Hairspray is the only real­ly devi­ous movie I ever made. The musi­cal based on it is now being per­formed in prac­ti­cal­ly every high school in America, and nobody seems to notice it’s a show with two men singing a love song to each oth­er but also encour­ages white teen girls to date black guys? Pink Flamingos was preach­ing to the con­vert­ed, but Hairspray is a Trojan Horse. It snuck into Middle America and nev­er got caught. You can do the same thing.

Listen to your polit­i­cal ene­mies, espe­cial­ly the smart ones. And then fig­ure out a way to make them laugh. Nobody likes a bore on a soap box. Humor is always the best defense and weapon. If you can make an idiot laugh, they’ll at least pause and lis­ten before they do some­thing stu­pid to you. Refuse to iso­late your­self. Separatism is for losers. Gay is not enough any­more. It’s a good start, but I don’t want my mem­oirs to be in the gay sec­tion near true crime at the back of the book­store next to the bath­rooms. No, I want it up front with the best-sellers. And don’t het­ero­sex­u­al kids actu­al­ly receive more prej­u­dice in art schools today than the gay ones? Things are a‑changin’. It’s a con­fus­ing time.

This might be time for…a trig­ger warn­ing. The amaz­ing con­cept I’ve heard about where you’re sup­posed to warn stu­dents if you’re going to talk about some­thing that chal­lenges their val­ues. I thought that’s why you went to col­lege. My whole life has been a trig­ger warn­ing but, you have been warned. So the trig­ger warn­ing is in effect and now back to the pre­pared speech.

Don’t hate all rich peo­ple. They’re not all awful. Believe me, I know some evil poor peo­ple, too. We need some rich peo­ple. Who else is going to back our movies or buy our art? I’m rich. I don’t mean money-wise, I mean that I have fig­ured out how to nev­er be around ass­holes at any time in my per­son­al and pro­fes­sion­al life. That’s rich. And not being around ass­holes should be the goal of every grad­u­ate here today. It’s okay to hate the poor, too, but only the poor of spir­it, not wealth. A poor per­son to me can have a big bank bal­ance, but is stu­pid by choice, uncu­ri­ous, judg­men­tal, iso­lat­ed, and unavail­able to change.

I’m also sor­ry to report there’s no such thing as kar­ma. So many of my tal­ent­ed, great friends are dead, and so many fools I’ve met and loathed are still alive. It’s not fair, and it nev­er will be.

Parents, now it’s time to talk to you. God, these kids can be brats, can’t they? Entitled lit­tle bas­tards. Do they think you’re made of mon­ey? Can’t they give you a sec­ond to adjust to such social changes as sex­u­al reas­sign­ment surgery, horn implants, and the polit­i­cal rights of the adult baby community?

And young adults, maybe today is the day you stop blam­ing your par­ents for every prob­lem you’ve ever had. Yes, it’s a drag you were kept locked in a card­board box under their bed and dai­ly whipped with a car aer­i­al, but it’s time to move on. We’ve all been dealt a hand. Deal with it. Whining is nev­er appeal­ing in a col­lege graduate.

And par­ents, vice ver­sa. You don’t get to order up your kids, either. Maybe your daugh­ter did tat­too her entire face. Well, work with whatcha got. Think pos­i­tive­ly. Maybe she’ll open a fan­cy tat­too par­lor in Paris.

I’m touched to some­times see dis­traught par­ents bring­ing their angry and defi­ant teenage chil­dren with them to see my spo­ken word show in a last-ditch effort to bond. At least both sides are try­ing. The truth of matu­ri­ty will come to fam­i­lies if every mem­ber is patient. I look back in won­der at how under­stand­ing my par­ents were. Dr. Spock did­n’t have a chap­ter in his child-rearing book on how to han­dle your son if all he want­ed to do as a child was play ​“car acci­dent.” Yet my mom took me to junk­yards as a tod­dler and let me wan­der around fan­ta­siz­ing ghoul­ish­ly. My dad even lent me the mon­ey to make Pink Flamingos and I paid him back in full with inter­est. But look­ing back, did I real­ly expect him to be thrilled that I had made one of the ​“most stu­pid, vile, repul­sive films ever made” as Variety called it?

My par­ents made me feel safe, and that’s why I’m up here today. That’s what you should try to do to your chil­dren, too, no mat­ter where you get your chil­dren these days. Contemporary art’s job is to wreck what came before. Is there a bet­ter job descrip­tion than that to aspire to?

Here’s anoth­er trig­ger warn­ing, and par­don her sign­ing. [ges­tur­ing at inter­preter] Go out in the world and fuck it up beau­ti­ful­ly. Design clothes so hideous that they can’t be worn iron­i­cal­ly. Horrify us with new ideas. Outrage out­dat­ed crit­ics. Use tech­nol­o­gy for trans­gres­sion, not lazy social liv­ing. Make me ner­vous. And final­ly, count your bless­ings. You got through col­lege. You did­n’t com­mit sui­cide, OD, or have a ner­vous break­down, and let’s remem­ber the ones who did. It’s time to get busy. It’s your turn to cause trou­ble, but this time in the real world, and this time from the inside.