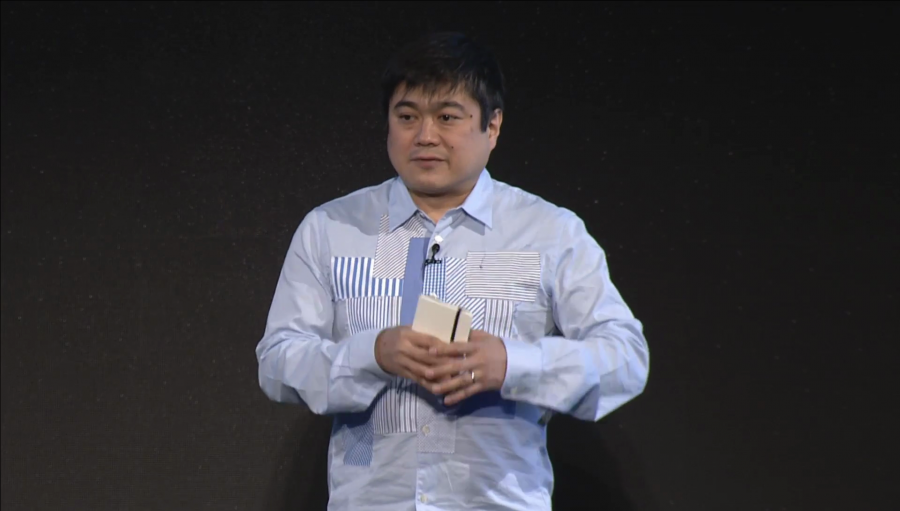 I don’t know how many of you are old enough to remem­ber The Blues Brothers, but there’s a scene in The Blues Brothers where they’re doing their sort of final gig and all these police offi­cers are rolling in, and they say wel­come to every­body, includ­ing mem­bers of the Illinois law enforce­ment com­mu­ni­ty. So, I know that here we have prob­a­bly some of the most dis­obe­di­ent peo­ple in the world, as well as mem­bers of the estab­lish­ment and the law enforce­ment com­mu­ni­ty. And so this is real­ly kind of a treat, because I was talk­ing to some of the peo­ple in admin­is­tra­tion, and I think MIT is one of the few places that we could have a con­fer­ence about the top­ics that we’re going to talk about today, with sort of schol­ar­ship and a straight face. And so I think that this is sort of part of our man­date as MIT, to be doing this sort of thing.

The Media Lab has been try­ing to do these sum­mer con­fer­ences. This is the sec­ond one. Last year we did one on design. And this year’s top­ic was inter­est­ing. Part of it got start­ed— I remem­ber I was hav­ing a con­ver­sa­tion with a fac­ul­ty mem­ber after they had got­ten tenure. And I’d known him this fac­ul­ty mem­ber for a while, and he said, ​“Well, you know there’s actu­al­ly three research top­ics that I’d real­ly real­ly love to do.” He’s one of our best fac­ul­ty. ​“But I can’t tell any­body, because I’m afraid. I’m afraid that it won’t get peer reviewed. I’m afraid I’ll be ridiculed. I’m afraid my stu­dents won’t come join my group any­more. So I just can’t tell anybody.”

And that got me think­ing, because of those three top­ics were actu­al­ly kind of impor­tant ideas. And so I real­ized that right now in sci­ence, because of the peer review process, because you sort of have to fit in, there is a lot of impor­tant research that needs to be done. So it’s not like the days like Copernicus, where sci­en­tists are killed for what they pub­lish. But still, it’s sort of like dying when sud­den­ly you’re left out to hang.

Having said that, talk­ing to peo­ple who study the his­to­ry of sci­ence, and you look at Nobel Prize win­ners, many of them have real­ly tak­en sort of career-threatening risks in order to win Nobel Prizes. So even sci­ence, which feels like an area where you’re sup­posed to ques­tion author­i­ty and think for your­self, you actu­al­ly have to be rather risk-taking and disobedient.

So this idea of for­bid­den research being an impor­tant area was kind of ger­mi­nat­ing. And then Ethan in Civic Media—he’ll talk more about it—did this con­fer­ence called Freedom to Innovate on how cer­tain laws impinge on our abil­i­ty to inno­vate, and how laws meant for crim­i­nals are often applied towards legit­i­mate research to sti­fle inno­va­tion. So there are a num­ber of these sort of things com­ing togeth­er. And then I real­ized that there’s a kind of courage that needs to hap­pen when we explore these areas of for­bid­den research.

So that was kind of how we got the idea for the con­fer­ence. And I’ll have Ethan come up lat­er and describe a lit­tle bit more about it. But one oth­er thing I want­ed to talk about was—and this will be sort of in the last panel—but how does an insti­tu­tion become disobedience-robust? So, when peo­ple ques­tion author­i­ty, how do you get stronger rather than weak­er? Because I think laws and norms and rules are sort of set in place to usu­al­ly pro­tect the sta­tus quo. And it is real­ly the man­date of aca­d­e­m­ic insti­tu­tions, or soci­ety in gen­er­al, to ques­tion those laws and rules that are either out­dat­ed or wrong. Because if we did­n’t have that ques­tion, if we did­n’t have ​“dis­obe­di­ence,” we would still have slav­ery. We would­n’t have had the civ­il rights movement.

And so if you think about peo­ple who are sort of enshrined today, like Martin Luther King, or Elizabeth Cady Stanton, or Harriet Tubman, or Mahatma Gandhi, or even the Boston Tea Party, they were quite dis­obe­di­ent, dis­rup­tive, and some­what unlaw­ful at the time. But with­out that, we would­n’t have had a lot of pos­i­tive social change. So we also want to talk about dis­obe­di­ence in the con­text of for­bid­den research.

And one thing I want­ed to announce today— Unfortunately Reid Hoffman could­n’t be here this morn­ing. He’ll be here tomor­row. But Reid Hoffman has agreed to fund a dis­obe­di­ence prize. And I was hop­ing that we could announced the win­ner today, but it turns out that we’ve had a num­ber of con­ver­sa­tions. It’s a lot more com­pli­cat­ed than you might imag­ine. Because we reached out very broad­ly, from Malala to Anonymous. And you can imag­ine we have a diverse set of views on who should win the prize. The prize is a $250,000 cash prize. And so it’s going to be a process.

We’re first going to kind of open up and have a con­ver­sa­tion around what are the prin­ci­ples of soci­etal­ly use­ful good dis­obe­di­ence. And then we’ll come up with a way to do the search. And then a group of peo­ple who will help us make the selec­tion. So we don’t have a firm date when this prize will be giv­en in exact­ly what form. But the fact that we’re going to do the prize is an exper­i­ment. And I think if the exper­i­ment goes well, we’ll con­tin­ue to do it. But I think hav­ing a prize for good, sol­id, use­ful dis­obe­di­ence I think is a real­ly impor­tant sig­nal that we hope to be able to send.

So with that I’d like to bring up my cohost and the MC for today, Ethan Zuckerman.

Video archive for this session