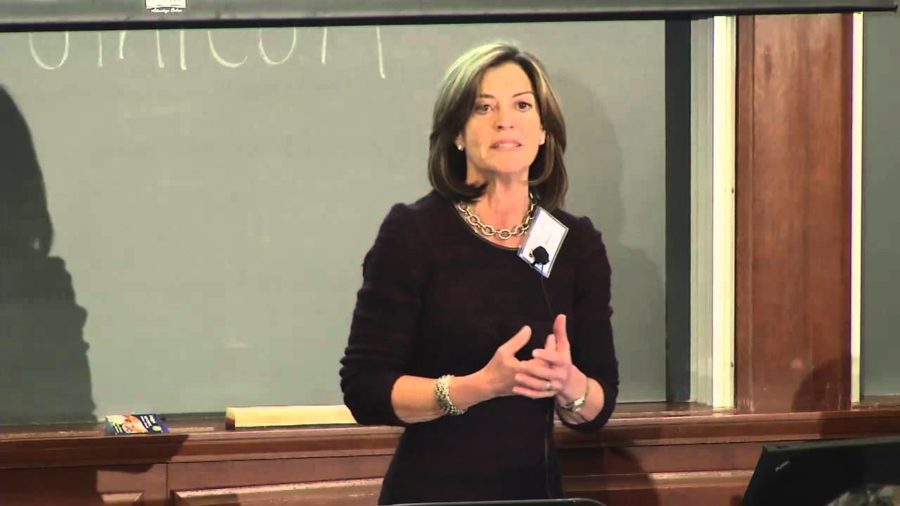 Ellen Miller on Interventions for Institutions

Micah Sifry: Our next speaker is Ellen Miller of the Sunlight Foundation and before that Center for Responsive Politics and Public Campaign. She's been in this business for a very long time.

Ethan says this is nepotism. I don't think it's nepotism but there's clearly a relationship. I'm an advisor to the Sunlight Foundation. Ellen and I are close collaborators. So I'm actually going to kinda start and then hand the ball off to her—

Sifry: Collaboration, then. It's a community of interest, not a conflict of interest. Especially if we're being transparent about it.

So somebody asked earlier today about not truthiness but trustiness and whether we could somehow signal it in clearer ways. And I sort of elbowed Ellen and I said, "Remember that slide we built five years ago when we were trying to convince some potential funders of the Sunlight Foundation of like where we would like to get to eventually?" 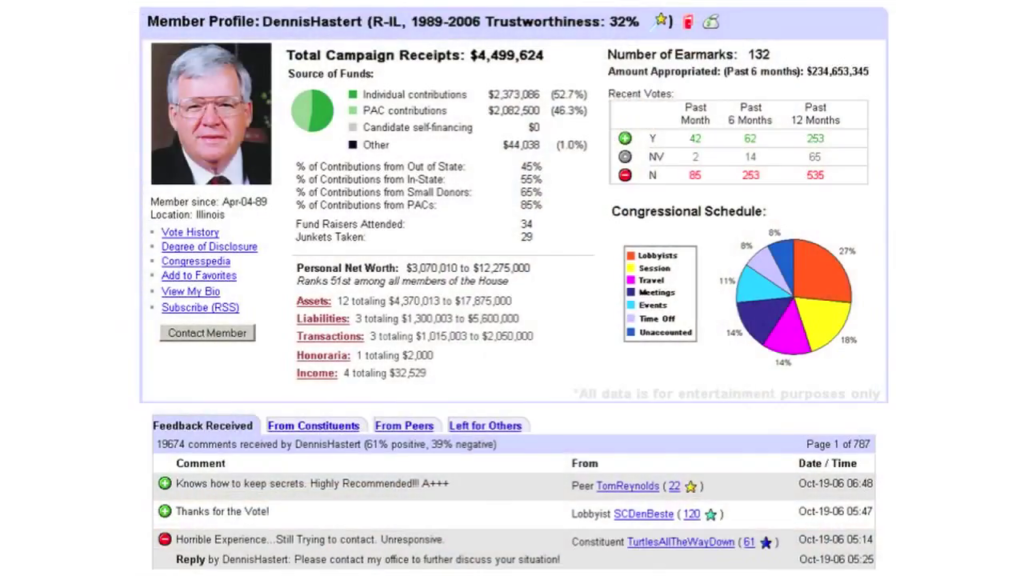 And so this doesn't exist. This is a mockup. It's not very good, in that it hasn't really been designed to look that good. But it gives you an idea of a possible direction where you might be able to get to someday (maybe the hackers tomorrow can be a little inspired by this), of really collecting all the relevant information about a politician and his voting record, his campaign contribution background. Who he's meeting with in terms of his congressional schedule. What he's earmarking. What kind of feedback he's getting from constituents.

Obviously some of this data doesn't exist, Or if it does it's dispersed. And some of it does exist. And I think what Ellen is going to do is show us what Sunlight actually is putting together already, and which is hopefully part of this infrastructure of making a stronger immune system. Ellen?

Ellen Miller: Hi every­body. I used choco­late as my caf­feine intake a few min­utes ago, so I’ve got sug­ar and caf­feine in me. Thanks Micah. In the inter­est of full dis­clo­sure I should tell you that the oth­er co-host of this this pan­el, Zephyr Teachout, also worked with Sunlight in the ear­ly days. In fact, she worked to devel­op this piece of infor­ma­tion, the con­gres­sion­al sched­ule, which we real­ly have now for about four mem­bers of Congress. So we have a ways to go on that. 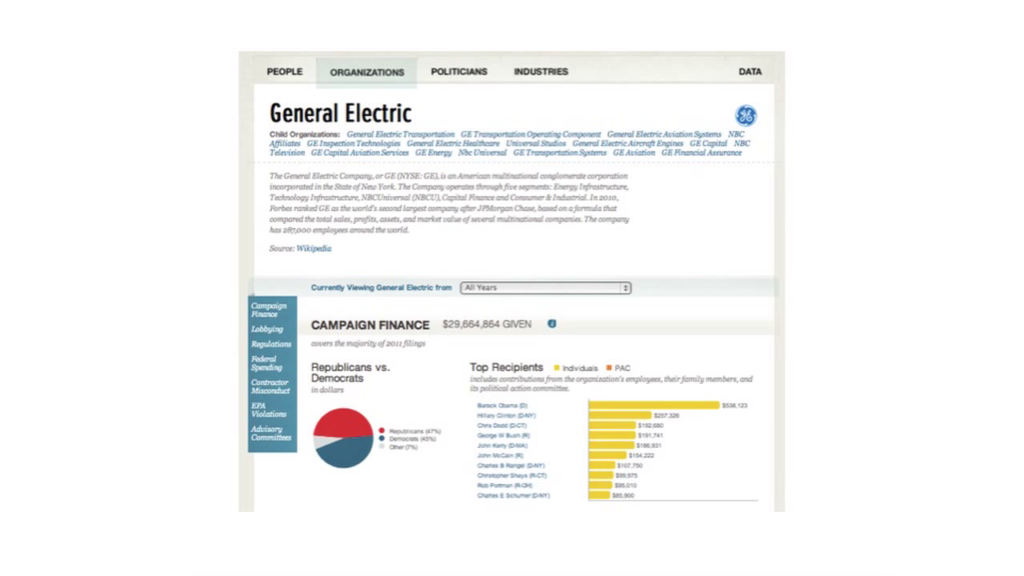 Alright. So I’m going to show you very quick­ly a cou­ple of things. I’ve long had this fan­ta­sy in my entire career, which has most­ly been in the field a mon­ey and pol­i­tics, to be able to find one place where you could enter a search term like this one, ​“General Electric,” and see every­thing you could find out about a com­pa­ny, a cor­po­rate profile—what they do in Washington, what they do at the state lev­el. And Sunlight is mov­ing in that direc­tion. So you would think, and most of you prob­a­bly know, we have a site and you look at the cam­paign finance pro­file of a com­pa­ny like General Electric at the state ver­sus fed­er­al lev­el. So that was an accom­plish­ment to actu­al­ly mash those two data sets togeth­er, and the data is pro­vid­ed by our friends at the National Institute on Money in State Politics and the Center for Responsive Politics. 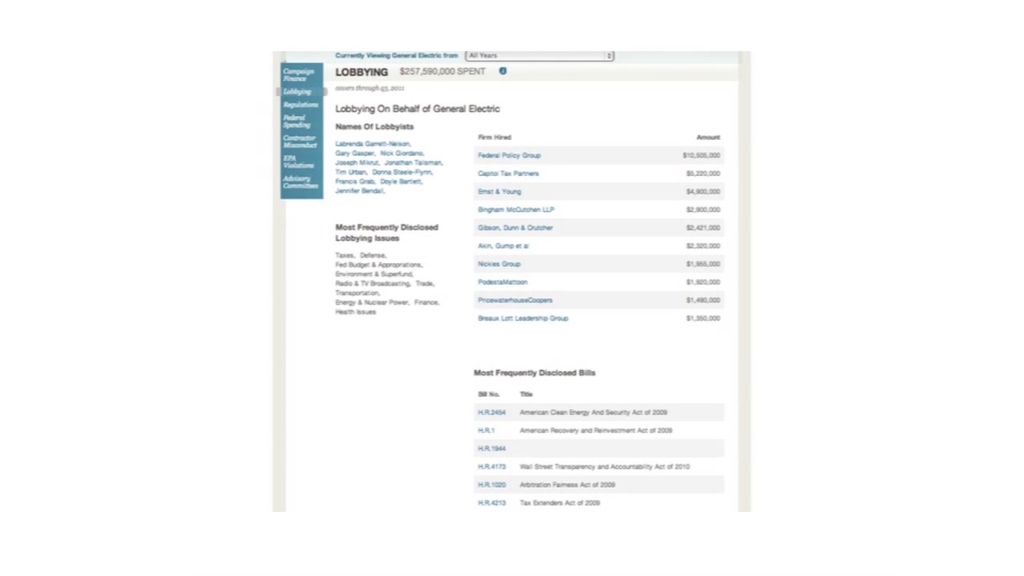 But that’s not enough. That’s the influ­ence indus­try, right? So what else in the influ­ence indus­try is impor­tant? Lobbying data is impor­tant. More mon­ey’s spent on lob­by­ing than actu­al­ly in cam­paign con­tri­bu­tions. So we added this into the same data set. A lot of oth­er stuff that’s real­ly impor­tant that shows a cor­po­rate pro­file. So in this soft­ware I was talk­ing about ear­li­er that uses nat­ur­al lan­guage pro­cess­ing soft­ware, we found that we are able to actu­al­ly scrape the web site reg​u​la​tions​.gov, where all of gov­ern­ment (or 89% per­cent or some­thing of gov­ern­ment) puts all of its reg­u­la­tions online and you can com­ment. 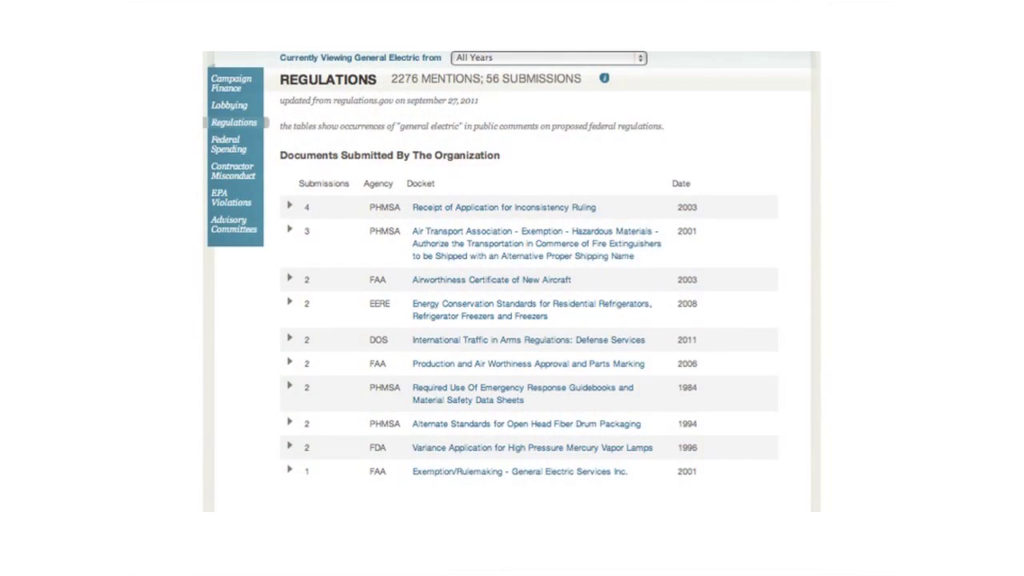 So in this par­tic­u­lar search this is still look­ing at General Electric’s com­ments on pend­ing rules and reg­u­la­tions. This was a major move for­ward for us. 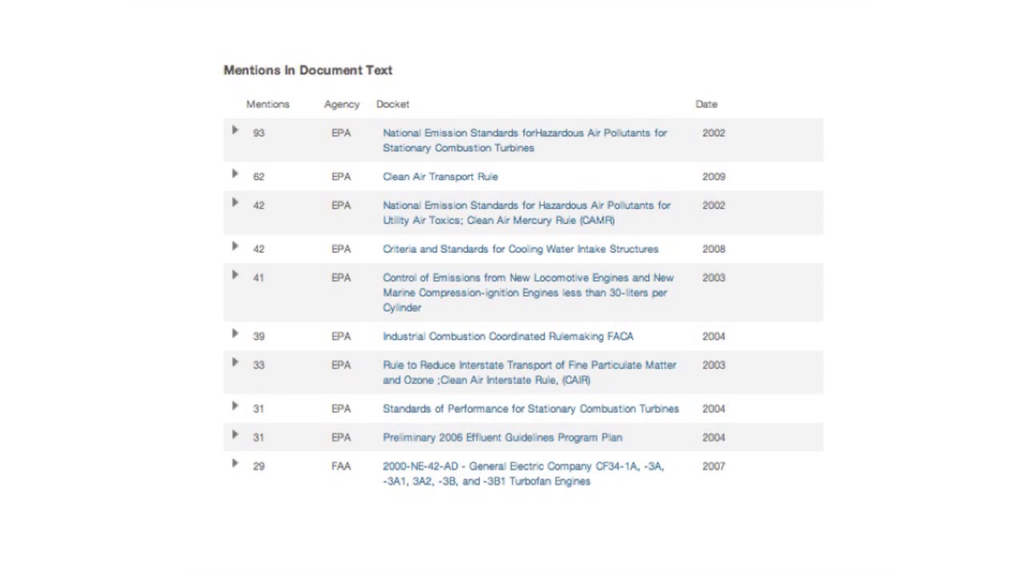 And then we thought, what oth­er data might be rel­e­vant to a cor­po­rate pro­file in Washington. We thought well, maybe EPA vio­la­tions. So we import­ed— I make it sound so easy. taught me who report­ed the EPA ECHO data­base into this. And so here what you have is a list of the times General Electric has been cit­ed by the EPA. 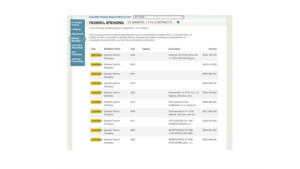 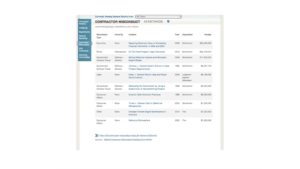 We won­dered maybe whether General Electric, or any oth­er cor­po­ra­tion, how much they’d received in fed­er­al grants or contracts—mostly con­tracts. There’s that infor­ma­tion. We brought that in as well. We won­dered if any of these con­trac­tors, any of these cor­po­ra­tions, had been cit­ed on the con­trac­tor mis­con­duct list. The project on gov­ern­ment over­sight gave us their list of the con­trac­tor mis­con­duct data­base, and that’s incor­po­rat­ed. There’s more on the EPA vio­la­tions. 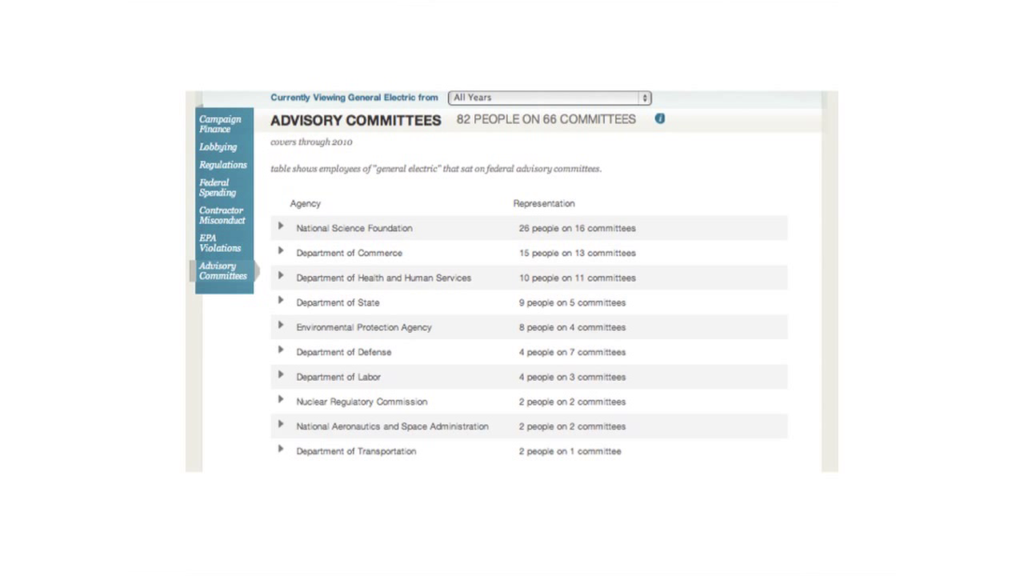 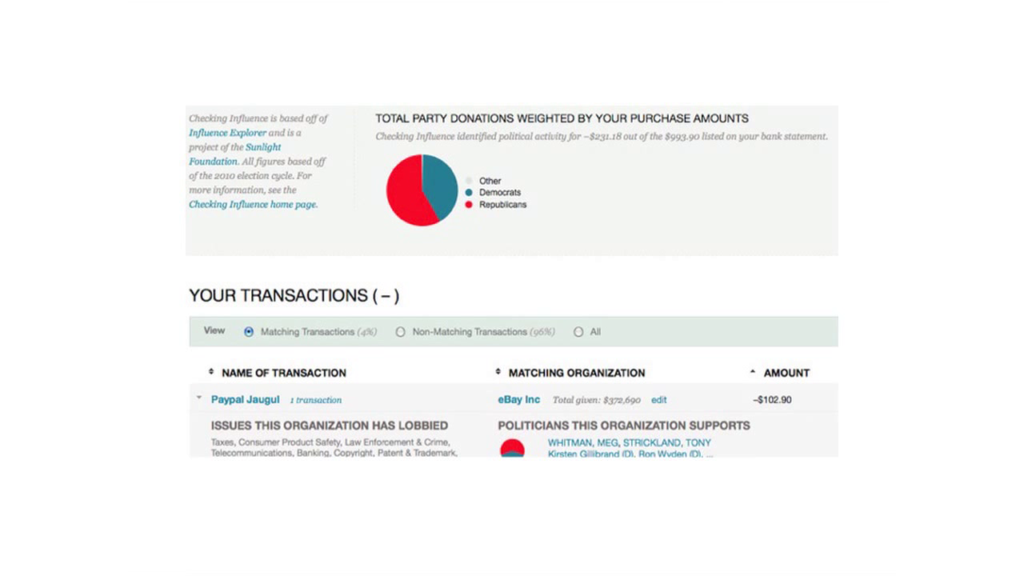 So this next site— Is this Influence Explorer? This is Checking Influence. We real­ly want to take the infor­ma­tion out of those large data­bas­es, and the first one I showed to you, Influence Explorer, is real­ly some­thing more for a jour­nal­ist to use. So we built a plu­g­in, which is what this reflects, so that you can up your check­ing account or your cred­it card account, and take a look at the enti­ties that you’re doing busi­ness with and see whether they’re giv­ing to Democrats or Republicans. Just infor­ma­tion you might want to have. 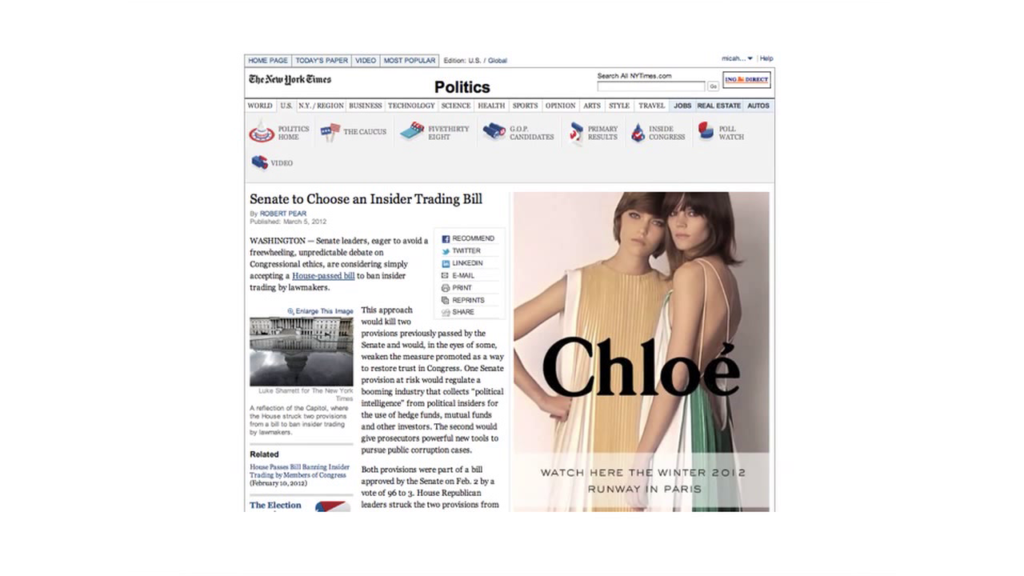 We built anoth­er web site called Polygraft, to enable you to fil­ter a news sto­ry like this one which appeared in the paper today… Filter it through this enor­mous influ­ence explor­er data­base, and show you down the right-hand side the con­nec­tion between the enti­ties men­tioned in this news arti­cle. And one of my long-time friends, Sheila Kaplan, a long-time inves­tiga­tive reporter said she finds it so very inter­est­ing to see the con­nec­tions that she did­n’t even always know were there. And I don’t know if she uses it before she pub­lish­es every sto­ry, but that is the idea, that jour­nal­ists and cit­i­zens would look to find the sto­ry behind the sto­ry. 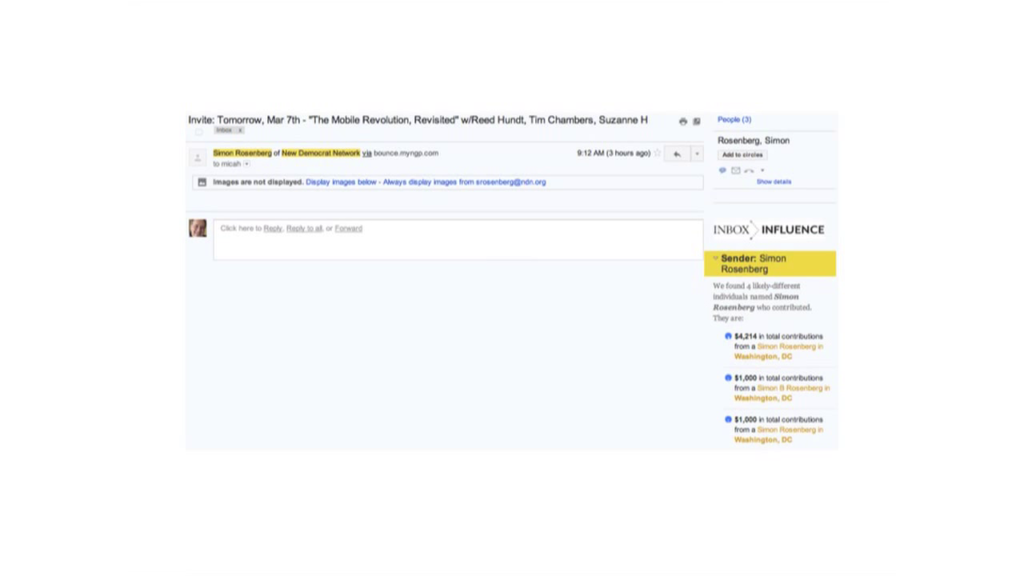 So this is Inbox Influence. So this is same data set. This is a Gmail plu­g­in. You can put it right into your Gmail account. And any­one who sends you an email will be fil­tered through this enor­mous same data­base of Influence Explorer, and you can get an indi­ca­tion on the right-hand side as to whether the per­son who’s writ­ing you an email has actu­al­ly made cam­paign con­tri­bu­tions, and how much.

This one actu­al­ly stopped our office dead in its tracks for about forty-eight hours as we fil­tered what our friends were send­ing to us. This is all pub­lic infor­ma­tion. The idea is to make this infor­ma­tion more and more per­son­al, more direct­ly involved with the things that you you are par­tic­u­lar­ly inter­est­ed in.

This is a detail on this. [slide not shown in record­ing] This is an email that Micah received this morn­ing. And this is what he found, in detail.

So that’s the last slide that I want to show you. We have a mobile app which is actu­al­ly in devel­op­ment now, which is a bar code scan­ner. And the idea is to scan a prod­uct, deter­mine which com­pa­ny made that prod­uct, and to look at what their cam­paign con­tri­bu­tion pro­file looks like, for peo­ple who are inter­est­ed. It’s not even in the alpha phase, it’s ​“can this pos­si­bly work” phase, and the jury is still actu­al­ly out. Except we did scan­ner Coca-Cola can and it worked on that and it worked on a Dr. Pepper can as well.

So stay tuned, in terms of the kinds of things that we’re able to pro­duce that will make a dif­fer­ence on the streets, and putting this infor­ma­tion eas­i­ly into the hands of peo­ple who can now they can use it to to fil­ter and make choic­es that they’re con­cerned about. Thanks.