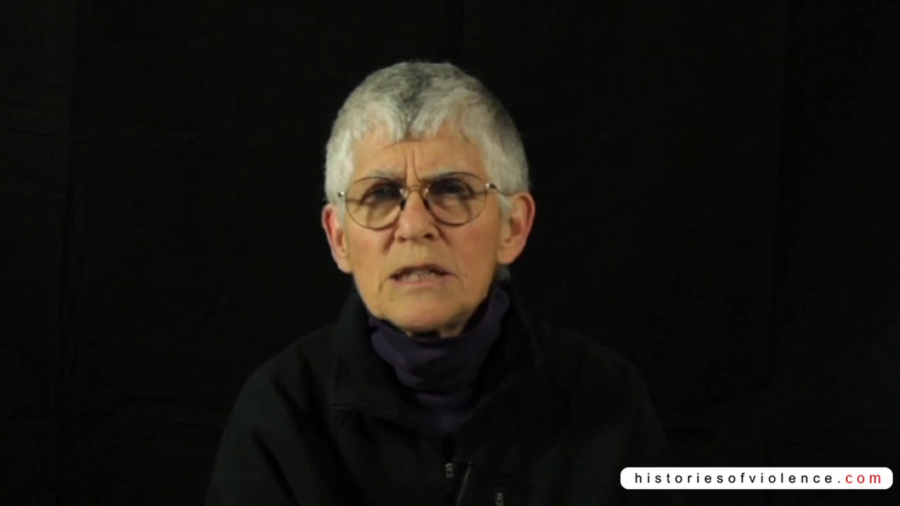 Last week I was invit­ed to Tokyo, where I had­n’t been for awhile. And my hosts were Japanese fem­i­nists; ter­rif­ic group of Japanese fem­i­nists doing all kinds of inter­est­ing work. And one after­noon we had a bit of free time, and so my friend Fumika took me on many sub­ways. And we went to a small muse­um called the Women’s Activism Museum [Women’s Active Museum on War and Peace], which I had nev­er heard of. I love muse­ums. I’m very inter­est­ed in what muse­um cura­tors do and make us think. But I had nev­er heard of the Women’s Activism Museum, which was cre­at­ed with a small bequest left by anoth­er Japanese fem­i­nist who died a very untime­ly death from cancer.

So we took our many sub­ways, and we walked then, using an iPhone to get us through the Tokyo back streets. And we came to a door that looked as though it was just an ordi­nary com­mer­cial busi­ness. There was no sign. And Fumika said, ​“Well, there’s no sign for a rea­son. Because the muse­um is upstairs and right-wing nation­al­ists come here even with­out the sign and demon­strate. With the sign we have even more demonstrators.”

So we went in the busi­ness door and through this com­mer­cial space. And then we walked up some stairs. And we came out into a very small, rather cramped, live­ly space. And it was the Women’s Activism Museum in Tokyo. And what it is, is a muse­um ded­i­cat­ed to the mem­o­ry of women who were abduct­ed and made to serve in the Imperial Army’s World War II com­fort women broth­el system.

Now, the rea­son this makes me think so much about dis­pos­abil­i­ty is because that’s exact­ly what these women were imag­ined to be. These are women from Taiwan, from Indonesia—including some Dutch women from Indonesia at the time. From Singapore, from Malaysia, and espe­cial­ly from the Philippines and from what is now South Korea. There are also women in the north but we don’t know much about them.

And so what these Japanese women have done is very sen­si­tive­ly, with a lot of sense of respect for every woman who sur­vived the com­fort women sys­tem, have tried to find and be in touch with women who sur­vived being forced into sex slav­ery, or forced pros­ti­tu­tion dur­ing World War II for the sake of the Japanese Imperial Army. And there’s one whole wall that is devot­ed to all the women that have both been found by the Japanese women and who have agreed—this is part of not being dis­pos­able; you have a say as to whether you want to be found, and when you’re found whether you want the find­ers to name you and put your pho­to­graph on a wall.

So far, there must be—I may have this wrong. There must be at least 140 women who have not only been found then named, but also have giv­en their own vol­un­tary con­sent that their own pho­to­graph can go up on the wall. Because part of not being dis­pos­able is to acknowl­edge your his­to­ry and not to find it any longer as a shame­ful history.

The oth­er thing that they’ve done here that teach­es us a lot about what anti-dis­pos­abil­i­ty looks like is to talk about the gen­dered pol­i­tics of World War II. Which means talk­ing about the gen­dered pol­i­tics of any mass vio­lence. So now, in Turkey there are Turkish fem­i­nists who are doing fem­i­nist analy­ses of the Armenian geno­cide. And they are find­ing women who at the time were young girls and were tak­en in, vol­un­tar­i­ly, by eth­nic Turkish fam­i­lies but then raised as eth­nic Turks. These young girls escaped the Armenian geno­cide, but only now as grand­moth­ers are they mak­ing con­nec­tion with Turkish fem­i­nists and Armenian fem­i­nists to actu­al­ly give their stories.

And some­times they don’t real­ly remem­ber how they came to be in these Turkish fam­i­lies, but what they do remem­ber, and this is so inter­est­ing, what they do remem­ber is bits of Armenian recipes. And they grew up as adult women start­ing to cook, and they began to put ingre­di­ents into dish­es that their Turkish adop­tive moth­ers would­n’t put in. And they began to think when they start­ed being con­tact­ed by Turkish fem­i­nists, they began to think, ​“Well, where did I learn that recipe from?” And they are real­ly recov­er­ing their own Armenian iden­ti­ties and their own past.

So anoth­er work of anti-disposability is find­ing peo­ple who have sur­vived, in this case as women, and find­ing their own mem­o­ries that come out of scraps and frag­ments of their own girl­hoods, to make bet­ter sense of what did hap­pen dur­ing the Armenian geno­cide. Who did sur­vive? What did they sur­vive with?

So I think it teach­es us a lot about what anti-disposability is like. It is not just us, if we are the ones who were on the per­pe­tra­tor side, out of a sense of guilt going and find­ing the mass killings, or the mass abuse as in the case of the Imperial Army’s com­fort women sys­tem. It is actu­al­ly engag­ing with those peo­ple who did sur­vive, or engag­ing if we can with the mem­o­ries of those peo­ple who did­n’t, and treat them with respect. Treat them as, if you will, fel­low cit­i­zens of the world. And to be a cit­i­zen means you get to have a say. You get to have an analy­sis. You get to impose mean­ing. The find­er, the per­son who’s guilty and try­ing to recov­er a dread­ful past is not the only one who gets to assign meaning.

When I was also in Japan, dur­ing the same very won­der­ful chock-full week, I was talk­ing to friends about the new German movie by von Trotta called Hannah Arendt. Now, I had seen Hannah Arendt in Boston before I went to Tokyo. And here in the US, it actu­al­ly did­n’t make much of a splash. There’s something…something hap­pened in its New York open­ing, and the first review­ers were quite neg­a­tive about the film.

I’m a big fan of Arendt, or I should say I try to under­stand Arendt and learn from Arendt. So I did­n’t pay any atten­tion to the reviews and I went to see the movie with four­teen oth­er peo­ple in the movie house in Boston. I thought it was a won­der­ful movie, and as movies are hard to make about thinkers I thought it was won­der­ful. But what was inter­est­ing is when I was in Tokyo, the movie was a hit. And in fact the the­aters were packed by fem­i­nists, Japanese friends said. And I said, ​“Oh gosh, that’s great. Why?” She said it’s because of Fukushima. It’s because of the reac­tor melt­down in the after­math of the ter­ri­ble tsuna­mi in 2011. And because of that, peo­ple are think­ing about accountability.

So in Tokyo, lots of peo­ple were going to see the movie Hannah Arendt because it allowed them to make con­nec­tions to her thoughts, her deep and rel­e­vant thoughts about account­abil­i­ty. They were think­ing about TEPCO, which is the big Tokyo elec­tri­cal pow­er util­i­ty, and the exec­u­tives who did not act account­ably, and the gov­ern­ment offi­cials who did not act accountable.