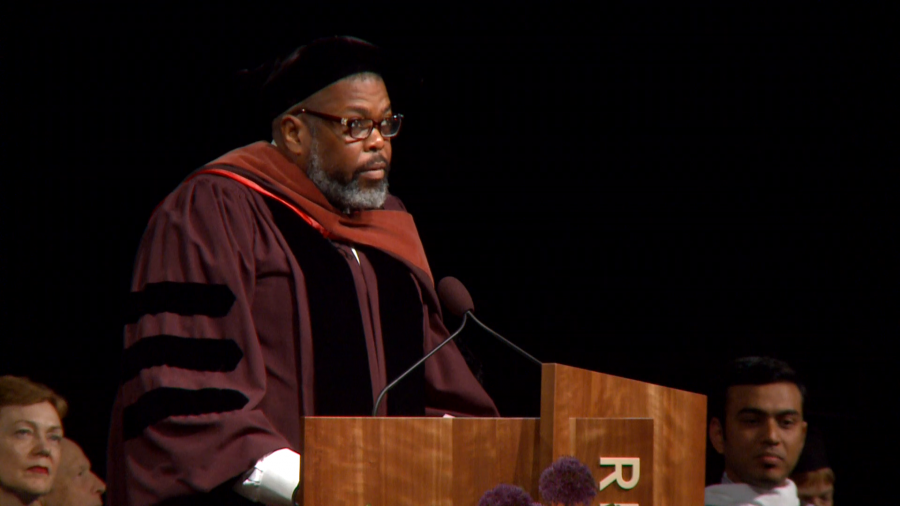 Pradeep Sharma: President Somerson, I have the great hon­or to present Hilton Als for the hon­orary Doctor of Fine Arts degree from Rhode Island School of Design.

Rosanne Somerson: Hilton Als, in books like The Women and White Girls, and your pro­lif­ic writ­ing in major pub­li­ca­tions like The New Yorker, Vibe, The Nation and The Village Voice, you have estab­lished an entire­ly unique voice and become a lead­ing inter­preter of American cul­ture. You have col­lab­o­rat­ed with and writ­ten exten­sive­ly about visu­al and per­form­ing artists, enrich­ing these encoun­ters with your sharp crit­i­cal per­spec­tive, your vast his­tor­i­cal knowl­edge, and your unique gift for ten­der, nuanced observation.

In your ele­gant prose and in the way you have cul­ti­vat­ed your crit­i­cal iden­ti­ty, your career has embod­ied many of RISD’s val­ues: Clarity, curios­i­ty, com­plex­i­ty, and courage, among so many oth­ers. You have been remark­ably gen­er­ous with your gifts, shar­ing your abun­dant intel­lect and tal­ent with mil­lions of peo­ple, through many plat­forms, as you will share them with us here today. Mr. Als, we are hum­bled and thrilled that you’re here today to address our soon-to-be grad­u­ates. And now you are going to be one of them. We are pleased to present you with this hon­orary Doctor of Fine Arts from Rhode Island School of Design

It is now my priv­i­lege to invite Hilton Als to address this year’s grad­u­ates, their fam­i­lies, loved ones, and friends.

Hilton Als: Thank you so much. If you can’t hear me, just com­plain. I feel like Erica Badu at the begin­ning of ​“Tyrone,” you know? That lit­tle riff where she says, ​“I’m an artist. I’m sen­si­tive about my bleep.” Yeah, I’ll be nice about it.

I want to thank the trustees, President Somerson, Provost Sharma, the incred­i­ble team here at RISD, my fel­low hon­orary doc­tor­ates, and the grad­u­at­ing class, for invit­ing me to this incred­i­ble event. I won’t take up too much of your time. I’m going to read a piece now that I’ve writ­ten for you called ​“The Case Against Cynicism,” because that’s where we need to be and live. It begins this way.

Just recent­ly, I received a let­ter. I’m old enough to refer to emails as notes or let­ters. And its first dis­tinc­tion was its author. The note was writ­ten by a fabled American artist, a chore­o­g­ra­ph­er I admired from child­hood on for her vivid, dra­mat­ic, humor­ous, and roman­tic dances that had done much to cel­e­brate American form and move­ment. The way we walk, how we play, what it looked like when one embraced an ene­my, or how the atmos­phere changed when, as lovers, we part­ed from one anoth­er and walked away.

My cor­re­spon­den­t’s name, Twyla Tharp, is as American as her vision, and she is to my gen­er­a­tion what Martha Graham was to your grand­moth­er’s, and what Savion Glover is to yours. Her let­ter con­tained sen­tences every artist loves hear­ing from anoth­er artist. ​“I like your stuff. No agen­da. Let’s meet.” One feels alone, and then sud­den­ly not alone, read­ing mis­sives like that. And as I sat read­ing and reread­ing Twyla’s invi­ta­tion, I could scarce­ly believe my eyes, I had loved her for such a long time.

I thought of where we all begin, which is to say with a name. And Twyla’s name, what a Hoosier sto­ry that is. Before her birth in Indiana in 1941, Twyla’s moth­er, Mrs. Lucille Tharp (her four chil­dren called her ​“Lethal”) was read­ing the local paper when an item caught her eye. It said that Twila (with an ​“i”) Thornberry [Thornburg] had been crowned the 89th annu­al Muncie Fair Pig Princess. Mrs. Tharp thought that Twyla (but with a ​“y”) might be a nice name for her eldest child. It would look good on a mar­quee. She was right.

“Destiny, quite often, is a deter­mined par­ent,” Twyla wrote in her 2003 book The Creative Habit, ​“learn it and use it for life.” And by the time Twyla was four, Mrs. Tharp was dri­ving her eldest child to all sorts of lessons all the time. Tap and bal­let, piano and sightread­ing, twirling and gym­nas­tics. These were the tools Twyla would need to build her own house as an artist. Mrs. Tharp knew what that house looked like, but she had nev­er lived in it her­self. An Indiana farm girl who had trained to be a con­cert pianist, she had a fam­i­ly at a time when mak­ing work and rais­ing chil­dren was not a pos­si­bil­i­ty. Not even an imag­ined possibility.

My moth­er, Marie Als, was a deter­mined moth­er, too. She grew up in Brooklyn dur­ing the Depression and World War II, a child of the great West Indian migra­tion that made East New York and Crown Heights and Flatbush dif­fer­ent than it had been once. As a girl, my moth­er loved to dance. From all accounts, she was a fab­u­lous social dancer. My uncle called her the girl of a thou­sand steps. There she is in my mind’s eye danc­ing, jit­ter­bug­ging at the Savoy in Harlem, or danc­ing a kind of ener­getic two-step, under the stars some­where in a world that have yet to lim­it her dreams, dreams she passed along to her chil­dren. But I nev­er want­ed her dreams. I want­ed her to keep them, use them for herself.

But how could she build her artist house when she did­n’t even have access to the infor­ma­tion about which tools she’d need to build her own place as a cre­ator? There’s no worse here. Mrs. Tharp, know­ing what that house looked like and not being allowed to enter it. My moth­er not even know­ing where that house might be placed, and her place in it.

Sitting in a new place, Twyla’s apart­ment with its park light and air, I looked at the small stage she built in her liv­ing room. And then I looked at Twyla on it, her splayed feet, and as Twyla showed me a bit of busi­ness, her eyes were bright with the artist’s way of bright­ness. ​“Look at me. Look at me. Do you feel me?” And of course, I saw my moth­er danc­ing in that airy apart­ment, if she’d access to the tools to turn the jit­ter­bug into her own dance.

And as Twyla raised a leg to show me some­thing else with a lit­tle laugh, a great feel­ing rose up in me. And it was the real­iza­tion that as artists, Twyla and I shared that which all artists share, hope. Indeed, we had been raised on it. It was greater than Mrs. Tharp’s grief about not being a con­cert pianist, or my moth­er a pro­fes­sion­al dancer. Hope was the force that got Mrs. Tharp to see her daugh­ter’s name in lights. And hope was the force that pro­pelled Mrs. Als to car­ry books home from her many badly-paid menial jobs, jobs in oth­er peo­ple’s homes, because her son liked to read and dream, and she liked to read and dream along­side him.

Was I my moth­er’s art? Was Twyla? And as Twyla and I moved into the kitchen to eat a slim­ming dancer’s din­ner, some sort of turkey thing, a grain thing, lentil soup, it occurred to me fur­ther that Twyla and I could hope because we’d seen what it had done for us. We were refugees from the world’s cyn­i­cism because we’d grown up in belief and knew, just as our moth­ers knew, that each act of mak­ing is born out of hope because there, in the rank earth where cyn­i­cism flow­ers, noth­ing grows.

You know that by now, too. All the paint­ings you’ve made, films you’ve pro­duced, sculp­tures or envi­ron­ments you’ve cre­at­ed, land­scapes you’ve designed, fur­ni­ture and decor you’ve made hap­pen, exist because you, like Orson Welles, anoth­er one of our great artis­tic fore­fa­thers, have what Welles iden­ti­fied in him­self: a sen­ti­men­tal attach­ment to hope, he said. Nothing could tear him or you away from it. Not the kids who tried to mess with you back in grade school and beyond, or skep­ti­cal fam­i­ly mem­bers who did­n’t love you well enough to just shut up and wish you well.

Cynicism vis-à-vis your mak­ing will increase as you get out there. The more far-ranging your self-exposure, the more cer­tain people—cynics—will take it as an oppor­tu­ni­ty to carve you up and dress you in their bit­ter­ness. Nietzche thought cyn­i­cism bal­anced hope, but I’m not buy­ing that. Essential to your work as artists is learn­ing to sur­vive. If you don’t, who will tell your sto­ry? And any­way, it’s fun to prove peo­ple wrong. If Emily Dickinson did­n’t insist she was a poet, there would be no poems. If James Baldwin did­n’t insist he had a voice, there would be no essays. If Orson Welles did­n’t insist on his vision despite indus­try cyn­i­cism, there’d be no Chimes at Midnight. And if Twyla Tharp did­n’t believe she could make dances, there’d be no ​“Deuce Coupe” or ​“Push Comes to Shove”, or the hun­dred and thirty-eight pieces she’s com­plet­ed years after Mrs. Tharp stopped dri­ving her to all those lessons.

From Twyla’s The Creative Habit,

London’s evening stan­dard from 1966. ​“Three girls, one of them named Twyla Tharp, appeared at the Albert Hall last evening and threat­ened to do the same tonight.”

And you’re still here, too. A weird part of your job as artists is build­ing on the for­ti­tude you’ve already evinced is part of your nature. You have to stay put while remain­ing porous, or open to expe­ri­ences that may hurt you. Your job, which is not insep­a­ra­ble from your life, is to com­bat cyn­i­cism while remain­ing open to expe­ri­ences that are some­times designed by cyn­ics to hurt you.

So, it’s impor­tant that you pay atten­tion and draw sus­te­nance from his­to­ry, that legion of hope­fuls who pro­ceed­ed you into not know­ing, despite cyn­ics. The naysay­ers who said that Billy Holiday’s way of singing would­n’t go over. The crap slingers who said Andy Warhol was noth­ing more than a fan­cy win­dow dresser.

Those artists have been where you are now, ten­ta­tive, and hope­ful, and look­ing for­ward, and look­ing back as Twyla did, when as a stu­dent her­self, she looked for her­self. Just as I see myself ever more clear­ly in my moth­er’s hope. In The Creative Habit, Twyla recalls that

In my senior year, when I was torn between my art his­to­ry stud­ies and a con­sum­ing urge to dance, I used to com­fort myself by camp­ing out in the dance col­lec­tion of the New York Public Library. I’m not sure what moti­vat­ed me to do this. The New York Public Library hous­es one of the world’s great dance archives. I asked the cura­tor to bring me pho­tos of the women pio­neers of dance. Isadora Duncan, Ruth St. Denis, Doris Humphrey, Martha Graham. I could read their move­ment vocab­u­lary from these pho­tographs, keep­ing what was use­ful and ignor­ing what was­n’t. Once they were locked in me, I was free to call on them any time. If one day I was stuck, I could ask myself, How would Martha move? or, What would Doris Humphrey feel like? In a sense, I was appren­tic­ing myself to these great women. That’s what I was doing in the archives. Shadowing my pre­de­ces­sors. This is how you learn your ancestry.

Your ances­try includes your ver­sion of Mrs. Tharp and Mrs. Als. And some­times your ances­try shows up when you least expect it. In let­ters addressed to peo­ple you do not know, but who will write to you, too, because that’s what the true artist shares. The free­dom of faith. The bound­less skies that roll and float above your tremen­dous and real and nec­es­sary hope, as you build your own artist’s house out there for all the world to see. Thank you.

“Embracing the Asterisk” at the RISD web site