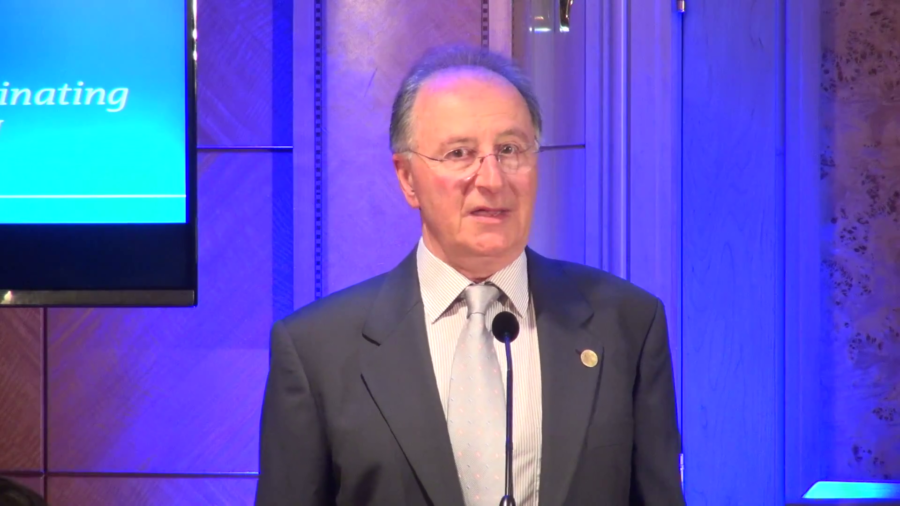 Ben Segal: Thanks to every­one. It feels like fam­i­ly. I had some pre­pared remarks, but actu­al­ly what Mike just said makes me feel a bit more philo­soph­i­cal. I want to just make a few remarks about men­tors and pro­tec­tors. Most of us here have need­ed either or both of those. So I want to talk about two peo­ple in par­tic­u­lar with­out whom I would­n’t be here. The first per­son you know, and the sec­ond per­son you almost sure­ly don’t know.

The first per­son is Tim Berners-Lee, who when he was being induct­ed two years ago in Geneva saw me in the audi­ence and went out of his way to rec­og­nize me as one of his men­tors. This is sort of one of the high points of my career. I was very moved by that.

Tim need­ed a pro­tec­tor, by the way. His pro­tec­tor was his man­ag­er Mike Sendall, who was a won­der­ful guy. Unfortunately no longer with us; he had leukemia. Mike was the one who wrote on Tim’s first pro­pos­al, ​“Vague, but excit­ing…” Nobody could fore­see what was going to hap­pen in the few years after that; that was 1989.

The sec­ond per­son, who you’ve not heard about, was my boss for around twen­ty years. And he pro­tect­ed me. He had vision. Like, [?] style, he could see five years ahead and knew how to get there. Why he is an unsung hero, I don’t. His name is Leslie Robertson. He fin­ished his career at CERN recent­ly, hav­ing also built the Worldwide LHC Grid, which did all the nec­es­sary com­put­ing to sup­port the LHC exper­i­ments which a cou­ple of ago, over a cou­ple of years, dis­cov­ered the Higgs Boson.

So with­out Les, I would not have had the pro­tec­tion nec­es­sary to intro­duce TCP/IP at CERN, which was a very dif­fi­cult job. And, among fam­i­ly, you know how tough it was. It start­ed in 1984, and believe me a lot of my blood was left on the floor for five years. We had very seri­ous oppo­si­tion. An unrea­son­able kind, I think. It still—some of it still hurts.

Anyway, Les, who was a great politi­cian… When I have a dirty trick done to me I tend not to for­get that. But Les could smile, car­ry on with it, and peo­ple like me need peo­ple like that.

Okay. I’m los­ing track now. Okay. I should also say I want to thank my fam­i­ly— Apart from the fam­i­ly here I want to thank my own fam­i­ly, who tol­er­at­ed me many years. I want to thank my son Adam, who’s here, who actu­al­ly flew me here in his Boeing Triple Seven. And thank you again for the Society and for the nom­i­nat­ing com­mit­tee, or what­ev­er it was that got me here. Thank you.