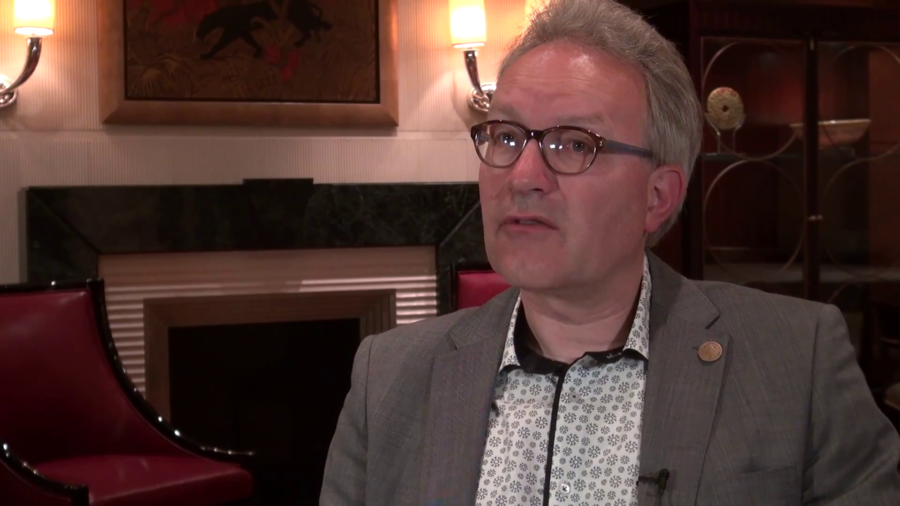 Erik Huizer: My role in the Internet has been… I’ve been active in so-called Internet insti­tu­tions that take care of the run­ning of the Internet since 1987, ​’88, some­thing like that. I was one of the first non-American peo­ple to join the IETF, the Internet Engineering Task Force, the stan­dard­iza­tion orga­ni­za­tion for the Internet. And I’ve worked hard to estab­lish that that became more inter­na­tion­al, for exam­ple by orga­niz­ing the first meet­ing of the IETF out­side of North America, in Amsterdam in ​’93. And I was also one of the first Europeans on the steer­ing group that steers the IETF, the Internet Engineering Steering Group, respon­si­ble for stan­dard­iz­ing appli­ca­tions at that time. And at that time I worked at stan­dard­iz­ing MIME, which makes sure that you can send attach­ments in emails, which nowa­days seems kind of obvi­ous that you can do that but it was­n’t at the time. So we stan­dard­ized— It was one of the most impor­tant ones I did. And the World Wide Web as we know it now, that was stan­dard­ized when I was respon­si­ble Area Director for appli­ca­tions, togeth­er with John Klensin my co-Area Director.

And so the after I served five years on the board of trustees of the Internet Society. In a very dif­fi­cult peri­od because that was ear­ly 2000 to 2005, and that was the first cri­sis— the dot-com cri­sis. So the Internet Society ran out of mon­ey and almost went broke, and we decid­ed on a plan to go and bid for the man­age­ment of the .org domain. So all the domain names end­ing in .org, which are not-for-profit domains, so that would fit real­ly well with the mis­sion of the Internet Society.

We won that bid and estab­lished a com­pa­ny to run that, a non­prof­it com­pa­ny called the Public Interest Registry. And I’m cur­rent­ly on the board of that com­pa­ny, mak­ing sure that their busi­ness is run well and that what­ev­er mon­ey they make goes to the Internet Society so that the Internet Society can do Internet projects in devel­op­ing coun­tries, etc. with it.

Huizer: If I think of break­through moments…there’s a cou­ple. Let me high­light two. One will show you that I’m not some­body who’s who is capa­ble of look­ing into the future. But in around ​’92 I was Area Director for Applications in the IETF, respon­si­ble for stan­dard­iz­ing appli­ca­tions. You have to remem­ber that at that point in time the Internet was ful­ly ASCII. So there was only let­ters as an inter­face. No graph­ics, only let­ters. And I was chair­ing a work­ing group at that time that was look­ing at cre­at­ing a com­mon inter­face for data­bas­es. Because at that point in time, the first data­bas­es became con­nect­ed to the Internet, and one was using an inter­face and anoth­er one was using anoth­er inter­face, and they were all dif­fer­ent and that was…unusable for users, because you had to learn all those interfaces.

So we want­ed to stan­dard­ize them. And we were work­ing on a pro­to­col which we called Gopher, which seemed to be doing a real­ly nice [job] and which could also incor­po­rate graph­ics inter­faces in the future. And we had a meet­ing in Zurich in ​’92. And I was chair­ing the meet­ing and there was this guy com­ing up from CERN called Tim Berners-Lee. And he said ​“Well I have an alter­na­tive for Gopher and it’s called the World Wide Web.”

And he showed it to us. We gave him the space to show it to us. And you have to remem­ber, he showed us an ASCII inter­face to the World Wide Web. It’s not the slick…you know, Internet Explorer, Safari inter­face that we are used to nowa­days. And we looked at it and we said ​“Well…that’s okay” you know. It’s not like we went all out like ​“This is going to change the world.”

Unfortunately. Because then I’d put my mon­ey in oth­er places if I’d known before­hand. But we rec­og­nized sev­er­al use­ful aspects of it. So I worked with Tim and John Klensin togeth­er, and we stan­dard­ized HTTP, we stan­dard­ized HTML. But we had a lot of dis­cus­sions about the URL, you know, the ​“http://” that you see in your brows­er address bar. And whether the ​“http” should be there or not. And I remem­ber in the dis­cus­sions we had some­body said ​“Well, imag­ine that it’s going to be put on the side of a bus in an adver­tise­ment.” And we were all laugh­ing our heads off because the idea of a URL on the side of a bus seemed total­ly ridicu­lous to us. Four years lat­er, the first URL was appear­ing on a bus. So that was one of those moments.

Another one which is less obvi­ous but was I think incred­i­bly sig­nif­i­cant is that the IETF had grown organ­i­cal­ly. Some guys got togeth­er, start­ed stan­dard­iz­ing some things. That grew, and grew. And some work­ing groups were formed. Procedures were formed along the way. But these pro­ce­dures were nev­er doc­u­ment­ed. So for out­siders, it was an unclear pro­ce­dure. It was not trans­par­ent. It was open, if you want­ed to par­tic­i­pate, but it was not clear how you had to par­tic­i­pate, and there­fore it was not real­ly open and stuff like that. There was no appeals process if you dis­agreed with the deci­sions taken.

And so we need­ed to doc­u­ment that process and write it down and make it more trans­par­ent, more open, and more account­able. And togeth­er with Dave Crocker I edit­ed the first RFC that doc­u­ment­ed the whole process and made it more trans­par­ent. And this RFC has now been super­seded by new ver­sions, etc. so my name’s dropped off it. But I’d like to think that that’s a sig­nif­i­cant con­tri­bu­tion that I’ve made to this whole thing.

Huizer: The Internet today, if I look at it I would say there’s a…it’s part­ly cloudy, part­ly sun­ny. And we’re work­ing hard to fig­ure out how to move the clouds away.

Huizer: I’ve got a lot of con­cerns. But let me start out by say­ing that it’s good to have con­cerns about the Internet. We con­tin­u­ous­ly need to work to make sure that the Internet stays open, trust­wor­thy, and acces­si­ble. Those three are of prime impor­tance. And we need to work on that.

But let me start by say­ing that what­ev­er prob­lems are in the way of the Internet, so far the Internet is like water. If you throw rocks in them, like prob­lems, it flows around it. So, the prob­lems we need to work on. That does­n’t make me a pes­simist. I real­ly think we can work that out.

The obvi­ous exam­ple of that is the Apple App Store. In the Apple App Store, nudi­ty is not allowed. Which is okay by American cul­tur­al stan­dards but which is by no means okay by European cul­tur­al stan­dards, for exam­ple. So here there is an implic­it deci­sion behind the metaphor of a store that defines the cul­ture of every­body who uses that kind of tech­nol­o­gy. So this is one of the dan­gers that you have. By using all those metaphors it’s not clear that there’s a lot of deci­sions behind it that real­ly impact culture.

The sec­ond thing that is a dan­ger is that a lot of peo­ple are no longer aware of the com­plex­i­ty and the tech­nol­o­gy behind it. They are not even inter­est­ed in it. And I see exact­ly with the younger gen­er­a­tion, both in the US as well as in Europe, that the inter­est in learn­ing Internet tech­nol­o­gy or ICT tech­nolo­gies to main­tain the Internet is decreas­ing. And that’s a real dan­ger because then we get depen­dent on the tech­nol­o­gy experts that remain, who are either deployed by some com­mer­cial com­pa­nies that make deci­sions that you are not aware of that they are mak­ing, or as Snowden has shown us it can come into the hands of a coun­try, like for exam­ple that most of those peo­ple would live in a coun­try that isn’t so demo­c­ra­t­ic and that things are being built into soft­ware and hard­ware that you don’t want to be built in there and invade your pri­va­cy or some­thing like that.

So we’re giv­ing away part of our free­dom by not being inter­est­ed in the tech­nol­o­gy. And that is made very easy by the fact that we hide it all behind these smooth and slick metaphors.

Huizer: Well there’s a cou­ple of action that we need to take. First of all, we need to make work­ing with gov­ern­ments who are— We need to make them aware of this prob­lem. And we need to go out and edu­cate peo­ple about the impor­tance of…that we have stu­dents who are will­ing to learn about the Internet and its oper­a­tion, and that it’s impor­tant to build that knowl­edge and to keep it in your coun­try and not to only have it in com­mer­cial com­pa­nies or in oth­er coun­tries but that you have it in uni­ver­si­ties, inde­pen­dent insti­tutes, etc.

So defin­ing the gov­er­nance of the Internet is a very dif­fi­cult issue. We’ve worked on that for the IETF, for ICANN, for the IGF, and we’re get­ting to a sort of multistakeholder-kind mod­el that seems to be work­ing. But for a lot of gov­ern­ments that’s very dif­fi­cult to acknowl­edge, that they are not in the lead but they are only one of the stake­hold­ers in that process. And most of the demo­c­ra­t­ic gov­ern­ments now seem to be able to go along with that, although the Republicans cur­rent­ly in the US are still oppos­ing it. But cer­tain­ly in less-democratic coun­tries, what you see is that there’s a cer­tain fear of the Internet, due to the Arab Spring devel­op­ments, etc. and they want more influ­ence and find it very dif­fi­cult to sup­port a mul­ti­stake­hold­er model.