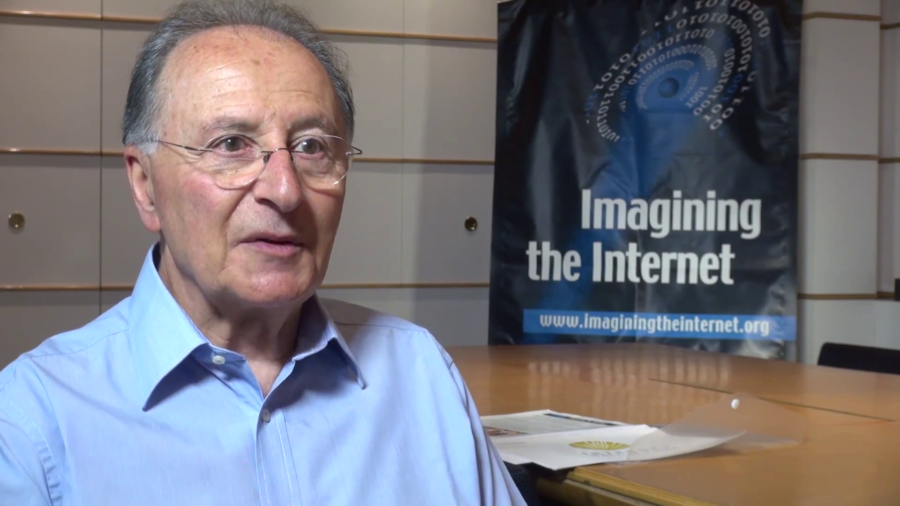 Ben Segal: Starting 1984, thir­ty years ago, I intro­duced the TCP/IP pro­to­cols into CERN. CERN is the physics lab in Geneva. Which I don’t have to…tell you more. Some peo­ple don’t know CERN. And between a ​’84 and ​’89, I did that with a very few peo­ple. I coor­di­nat­ed the intro­duc­tion of the Internet pro­to­cols, which were not want­ed at CERN. There was quite a lot of oppo­si­tion in Europe, and CERN is in Europe. And so it was an under­ground operation.

I also, start­ing from ​’86, taught Internet pro­to­cols, and Unix, and dis­trib­uted com­put­ing all over the world, start­ing in Italy, ICTP—International Center for Theoretical Physics in Trieste. That’s an insti­tute that teach­es stu­dents from devel­op­ing coun­tries. And so that led me to be invit­ed and teach for many years after.

So, I also was a mem­ber of the board of trustees of the Internet Society. So I’ve had that sort of role as well. But pri­mar­i­ly the rea­son I’m here is that I got inter­est­ed in the Internet from ​’84, and I was an ear­ly intro­duc­er at CERN.

Segal: So the key thing is that start­ing ​’89, Tim Berners-Lee invent­ed the Web at CERN. He was a young guy at CERN. He kind­ly said I was a men­tor to him, because I was doing this oper­a­tion of intro­duc­ing and teach­ing pro­to­cols. I taught him sock­et pro­gram­ming and that sort of thing. And I noticed him as a young…eager beaver. And I watched the process of him invent­ing the Web, single-handedly. So, that’s the high­light and I would say that was­n’t a result…you know, direct result of what I did, but cer­tain­ly I helped to cre­ate the ground for him, the envi­ron­ment for him, to make that inven­tion at CERN. Because CERN was not a par­tic­u­lar­ly fer­tile place. CERN is a physics lab. It’s not an inno­v­a­tive lab for com­put­er sci­ence, com­put­er net­work­ing. It still isn’t.

But, I knew Tim’s boss. And he was also a man, Mike Sendall, who made space for Tim. Tim was basi­cal­ly allowed to do this as a hob­by, aside of his main­line job. So that’s the direct, if you like, major impact. There were many peo­ple, like I was, who were intro­duc­ing the Internet in Europe, against oppo­si­tion. In the States maybe not. But the fact that it led pret­ty direct­ly to enable the inven­tor of the Web at CERN, a very unlike­ly place, I do take some cred­it for it.

Segal: Yes, it’s part­ly cloudy. I think prob­a­bly most peo­ple are gonna say that. The Internet was a dream for us, we thought, you know. What Tim used to say, by the way, Tim Berners-Lee used to say if peo­ple could just agree on a few sim­ple things. And I used to say to him that they’ll nev­er agree, Tim. There’s too many stake­hold­ers that don’t want to share. The big com­pa­nies, the big inter­na­tion­al orga­ni­za­tions. I said they would nev­er. But I was wrong.

So our dream that these pro­to­cols would unite the world and that the process of the Internet, which is a bottom-up process, you know— It’s a process. We say ​“rough con­sen­sus and work­ing code.” That’s the spir­it of the Internet. That that process did suc­ceed. It was a dream for all of us. And the result was that we con­nect­ed the world but we con­nect­ed the good stuff and the bad stuff as well. And every­thing fol­lows from that. That’s why it’s part­ly cloudy.

Segal: The con­cerns, okay. Like many peo­ple now, we’re con­cerned about this inva­sion of pri­va­cy. The whole thing about sur­veil­lance. In the past it was known that the NSA and the British equiv­a­lent were scoop­ing up all the traf­fic. This is going back a long time. But they weren’t able to process it. I mean, you could record email and phone or every­thing, but you did­n’t have the tech­nol­o­gy to process it. But now they do. And to store it. This is a major threat to freedom.

I was very inter­est­ed to see that Tim Berners-Lee him­self, at a TED con­fer­ence I think it was, actu­al­ly spoke out in sup­port of Snowden. This is of course very con­tro­ver­sial. But I must say I think that what Snowden did is a ser­vice to the world. And of course, it’s very del­i­cate what he did. He’s put his life at risk. But I think on the whole it was a very good thing. And it’s alert­ed people.

So that’s one fear. Basically my fear is that like many things in life and eco­nom­i­cal­ly, today I fear the Internet is going to be dom­i­nat­ed more and more by the rich and pow­er­ful. And I’m also fright­ened of what we call the Dark Internet. You know, there’s a sort of a sub-Internet where a lot of nasty stuff is going on. Maybe it’s good that it’s sep­a­rat­ed. Maybe it needs to be more sep­a­rat­ed. But cer­tain­ly it’s inevitable that the dark stuff in life is on the Internet as well as the Internet con­nects every­body. So that’s some of my fears.

Segal: We all need to keep eth­i­cal and social issues in our minds as we work on the Internet. This is not just preach­ing. For instance, in my life I made a com­mit­ment ear­ly on that I would nev­er take mil­i­tary mon­ey. And the only excep­tion to that, by the way, was in 1978 when I went to the first meet­ing on Internet in France, which was financed by NATO. At which Vint Cerf among oth­ers was talk­ing about inter­con­nect­ing com­put­er net­works. It was my first intro­duc­tion to IP gate­way­ing, as we called it in those days.

That was financed by NATO. With that excep­tion, which I think was a good thing, I’ve nev­er tak­en mil­i­tary mon­ey and I’ve con­scious­ly avoid­ed doing that. And I think that peo­ple need to think and con­sid­er what they’re work­ing on and what the con­se­quences can be. Many of the con­se­quences are unfore­seen. I mean I work in basic research at CERN. CERN is total­ly non- mil­i­tary. There’s noth­ing secret and it’s com­plete­ly open. But it’s unfore­see­able what you find. And inven­tions and dis­cov­er­ies can always be applied to evil things as well as good things.

But I think that we need to keep in mind then the eth­i­cal and social con­se­quences of what we’re doing. We need to keep the bottom-up prin­ci­ples of the Internet. The Internet was devel­oped by grad­u­ate stu­dents and gurus and peo­ple with a slight­ly sub­ver­sive atti­tudes, which I think is good. The forces against the Internet, which were very real and very strong in the 80s and ear­ly 90s, were the force of top-down, com­mit­tee designs. And this sort of over-centralized pow­er is not good when it’s applied on a world scale. The Internet is part of the clos­est thing to sort of a world gov­ern­ment agency. It’s one of the…mundi­al­iza­tion, we say in French—globalization.

Now, glob­al­iza­tion has its bad sides and its good sides. But in the end, we’re on one plan­et and we need to have glob­al­ized gov­ern­ment and glob­al­ized think­ing and glob­al­ized cohe­sion. But it’s good to keep this bottom-up spir­it, where the stan­dards of the Internet are designed by a bunch of peo­ple who get togeth­er a few times a year, called the IETF, and who sim­ply with good will and the best brains that they can muster make these stan­dards. And with that spir­it I think we can keep the Internet from going downhill.

And final­ly, we should strive for inter­na­tion­al con­sen­sus. Now, the Internet start­ed off as a US ini­tia­tive. That was by the way one of the prob­lems we had in Europe with it. CERN is a European lab, and many rules at CERN tried to buy European equip­ment, to pro­mote European choic­es. And it was dif­fi­cult to pro­mote US stan­dards. I had spent ten years in the US before I came to CERN. So I was infect­ed, if you like. I could pro­mote things like Unix, which is a bottom-up American inven­tion, things like the Internet, against oppo­si­tion. But I was open to that because I’d seen the pos­si­bil­i­ty. But the spir­it that this was a bottom-up thing, it was a small-is-beautiful thing, is very very impor­tant for the world and it’s appre­ci­at­ed inter­na­tion­al­ly. It’s not American any­more. The Internet’s not American any­more, and the nation­al­iza­tion of the Internet has been actu­al­ly a tri­umph. Some of our great­est peo­ple, like Vint Cerf, are very international-minded. And this has real­ly helped the Internet and the Internet Society to have a lot of success.