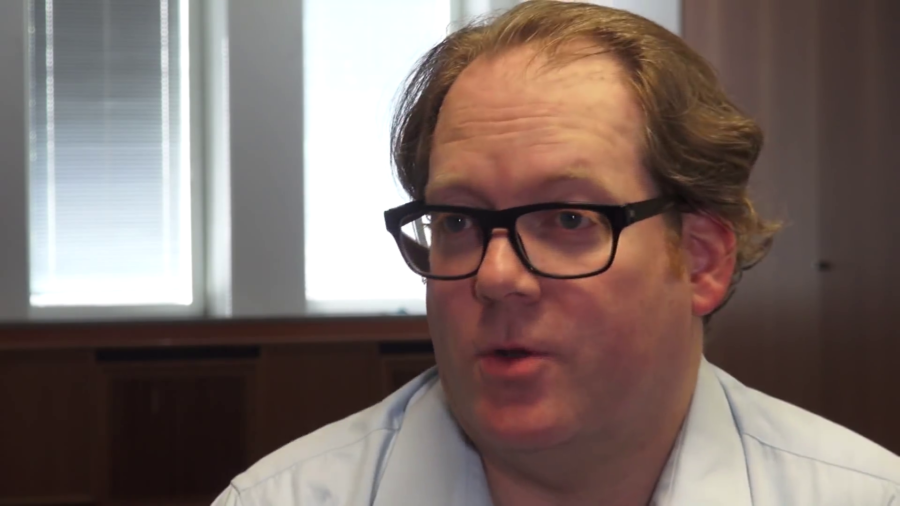 Intertitle: Describe one of the break­through moments or move­ments on the Internet in which you have been a key participant.

So, in 2001 I joined a small com­pa­ny. We were open­ing the first of the new top-level domains. The top-level domains are the right­most part: com, org, net. And we were start­ing a new one called ​“info.” And so I joined this lit­tle com­pa­ny and we got start­ed. And I real­ly did­n’t real­ly know that much about the Internet at the time. I joined as a data­base guy. But I got quick­ly inter­est­ed in it, and it was sort of inter­est­ing. But the strange thing is I have a very dif­fer­ent mem­o­ry of 2001 than every­body else because of course there were big world events at the time. But I was so busy work­ing on this stuff that I bare­ly noticed. So that was a big event for me.

Over time we’ve invent­ed some changes to the pro­to­cols, DNSSEC in par­tic­u­lar was some­thing that you you know, it was sort of excit­ing, to take an old pro­to­col that did­n’t have any secu­ri­ty and add this authen­ti­ca­tion of the data. And that’s been some­thing that I’ve worked on. So it’s been a real­ly inter­est­ing ride. I get to see the deep guts of the Internet working.

So, by nature I’m sort of a pes­simist. It’s one of the nat­ur­al things with peo­ple and tech­nol­o­gy, and so it’s always cloudy. But it’s cloudy part­ly because you can’t exact­ly see what’s com­ing next. And that’s that’s also very excit­ing. Storm clouds can be dra­mat­ic and they can bring big thun­der shows and so on. So I actu­al­ly like the clouds.

My big con­cern right now actu­al­ly has to do with the ten­den­cy of peo­ple to want to reg­u­late it. So, the Internet is most­ly suc­cess­ful because of the abil­i­ty of peo­ple to do what­ev­er they want. That is, inno­va­tion hap­pens wher­ev­er you are. You can just add things to it and so on, and nobody’s in charge. And that’s scary for a lot of peo­ple who want to run things. They want to be in con­trol. They want to make sure that all the rules are fol­lowed. But that’s how inno­va­tion hap­pens, right? that there’s not a lot of oppor­tu­ni­ty to keep con­trol over these things. And I’m wor­ried that we’re in an age where peo­ple want to clamp down and try to con­trol every­thing and try to cen­tral­ize all of the author­i­ty. And I think that’s a mis­take, because we’re going to lose the oppor­tu­ni­ty for new inno­va­tion. We’re going to lose the oppor­tu­ni­ty for new things to be invent­ed on the Internet. That’s my biggest worry.

Off-screen Interviewer: And the oppo­site of that, what’s your great­est hope for the future of the Internet?

Well, my great­est hope is that we won’t do that. And instead we’ll con­tin­ue to see this enor­mous expan­sion of ser­vices. People just invent things, right. When I start­ed in this, Facebook was­n’t a gleam in any­one’s eye and now it’s this mas­sive plat­form. Twitter, the same thing. All of those kinds of ser­vices that every­body just uses now, they’re part of the nor­mal back­ground of the Internet. And yet they weren’t invent­ed when I start­ed using the Internet. Nobody even had an idea that this was possible.

When I first con­nect­ed to the Internet, the Web did­n’t exist. And the abil­i­ty of peo­ple just to do those things at the edge is incred­i­bly excit­ing, because then this thing comes along, and you see it, you’ve nev­er seen it before, and now it takes off and it’s a big deal. I think that’s just the most won­der­ful thing. I don’t know what’s going to be invent­ed next, and that’s so fun.

Intertitle: Is there action that should be tak­en to ensure the best pos­si­ble future?

Nothing. That’s the best thing about this, that we don’t actu­al­ly have to do any­thing. We can not do things, and it’s the not doing that’s going to get us the most inno­va­tion. We can just leave things alone to grow in the way that they do. If we don’t take action, then we actu­al­ly get the biggest benefit.

I think the thing that’s real­ly excit­ing right now is this expan­sion into areas that…parts of the world that don’t have the infra­struc­ture. ICANN, for instance, was just in Africa; there was a meet­ing there. And you know, there are parts of Africa that have very very poor infra­struc­ture, they’re not very well con­nect­ed and so on. And yet they’re com­ing online because they skipped a whole gen­er­a­tion of con­nec­tiv­i­ty. They did­n’t run any wires. It’s all mobile, for instance. It’s all cel­lu­lar. And that is so excit­ing because there’s a whole new pop­u­la­tion that is join­ing this glob­al sys­tem. And we’re get­ting this enor­mous oppor­tu­ni­ty of com­mu­ni­ca­tion across lin­guis­tic and cul­tur­al bound­aries that we just did­n’t have before. So I’m real­ly pos­i­tive about this. It’s such a cool time to be alive.