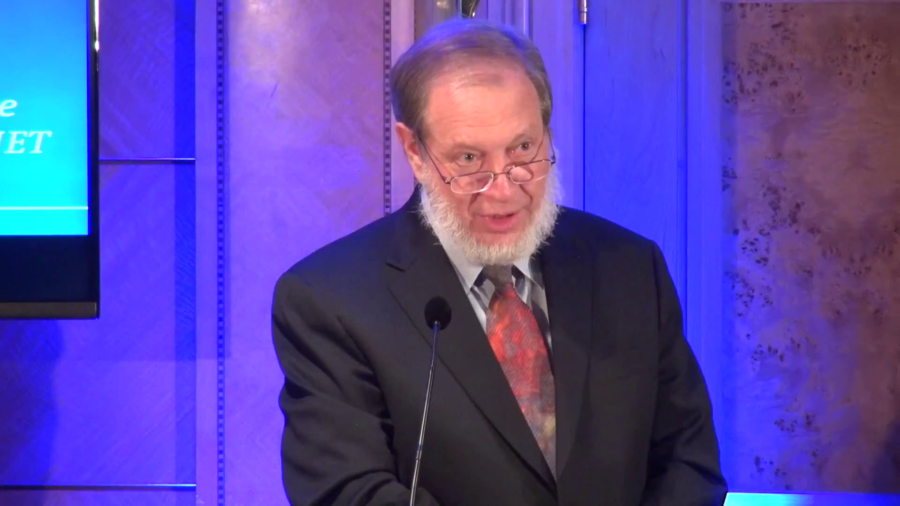 Introducer: Now we have Frank Heart, who led a small group at Bolt Beranek and Newman that won a con­tract to build the Interface Message Processor for an expand­able four-node ARPANET. Frank was unable to attend, but accept­ing on his behalf is Bob Hinden, chair of the Internet Society board of trustees.

Bob Hinden: I’m very hon­ored to be able to accept this for Frank. We talked on the phone last week, so he asked me to say a few things. The first was I think some­one men­tioned sort of being at the right place at the right time. So he said that hap­pened to him twice. First to work on the Whirlwind com­put­er project, you know, in the ear­ly days of com­put­ing, and then lat­er on the ARPANET. So he had a very remark­able career.

He said that the thing he most remem­bers about build­ing the ear­ly ARPANET was it was real­ly an amaz­ing effort by a few peo­ple. It shows what can hap­pen when you put togeth­er a very tal­ent­ed group of focused peo­ple, and they can real­ly accom­plish an amaz­ing amount of things. Because this was not some giant project, this was a real­ly small, focused project. And they did so many I think remark­able things that sort of built the base of what—you know, many of the tech­nolo­gies like rout­ing, that real­ly led to what we still use today in the Internet. So he want­ed to for me to thank you for his Hall of Fame induc­tion, and he accepts this on behalf of the team who built the orig­i­nal ARPANET. Thank you.