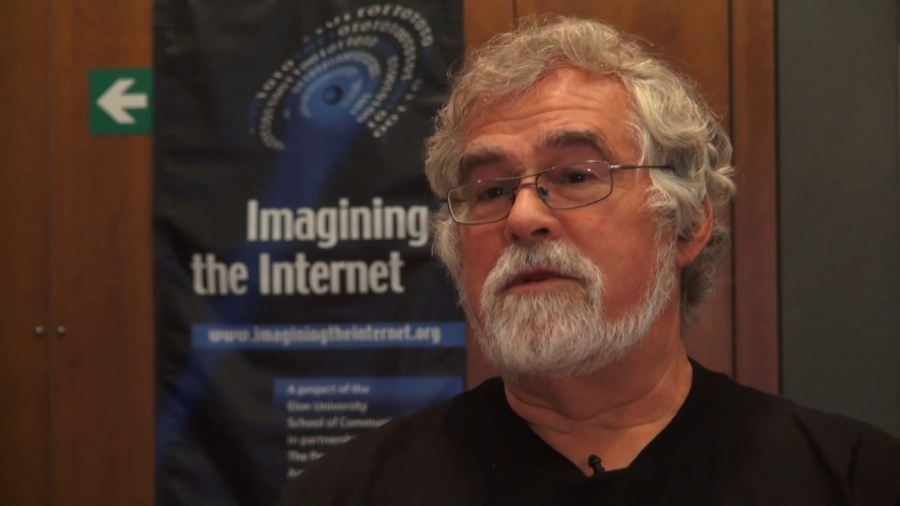 Bert Wijnen: I was in sys­tems man­age­ment and main­frames in my younger days, much younger days. And through IBM Research I got con­nect­ed to net­work man­age­ment in the space of the NSFNET back­bone in the US back in the late 70s. And they were going to upgrade from 56kb lines to one and a half megabit lines, which was enor­mous at the time. Now you know, every­body’s house has bet­ter connectivity.

And that got me in touch with peo­ple in the IETF devel­op­ing pro­to­cols for net­work man­age­ment. And I got involved in a work­ing group called SNMP (Simple Network Management Protocol). And I got very much involved, imple­ment­ed all the ver­sions that actu­al­ly were ever thought of, even those that were not published.

That way I guess I pro­filed myself in the IETF, and in 1998 I was cho­sen to be an Area Director for the Operations and Management Area. I did that for eight years. That was a very busy peri­od, so a lot of work there try­ing to steer some twen­ty or so work­ing groups in the direc­tion that the whole IETF want­ed to get con­sen­sus and get work done.

Then I was a few years a lit­tle bit less active, and now I have tak­en since 2008 a posi­tion on the ISOC board. Again, that’s some­thing that peo­ple have to choose you for. And so that’s why you see me here this weekend.

Intertitle: Describe one of the break­through moments or move­ments of the Internet in which you have been a key participant.

Well, there are prob­a­bly many favorite moments, like I worked many years on the SNMP pro­to­col, as I just men­tioned. And so by the time that became an Internet stan­dard, I believe it was some­where in 2006 or so—I for­get the exact time when it became a full stan­dard, that was quite an achievement.

But more impor­tant, lots of peo­ple in the indus­try that actu­al­ly had to oper­ate net­works still thought that SNMP was not the right thing, cer­tain­ly not for con­fig­u­ra­tion man­age­ment. And so we held a work­shop with the IAB, the Internet Architecture Board, and we invit­ed many pro­to­col devel­op­ers, peo­ple from uni­ver­si­ties, peo­ple from enter­pris­es, peo­ple from ISPs, and oper­a­tors. And that’s where we actu­al­ly defined what to do next in terms of net­work management.

And so that in the end result­ed in NETCONF (Network Configuration Working Group), that built a new data mod­el­ing lan­guage. That was actu­al­ly ​“net­mod.” So we had two work­ing groups, one for the pro­to­col, one for the data mod­el­ing lan­guage YANG, which used to be very suc­cess­ful. Especially this meet­ing we learned that many many oth­er work­ing groups are inter­est­ed in using that lan­guage for data mod­el­ing. And the net­conf pro­to­col, which is also out as a standard—proposed stan­dard, actually—and many imple­men­ta­tions. We have done an inter­op­er­abil­i­ty event last year, and we have like ten or so imple­men­ta­tions that inter­op­er­ate with each oth­er. So now we have to see how well that gets deployed, but I believe that’s hap­pen­ing. So that’s anoth­er good moment that we had.

I would cer­tain­ly not con­sid­er it sun­ny. I mean, it is sun­ny in terms of we get more and more Internet users around the world, and that’s grow­ing like hell, if that’s the nice with to use. That’s good. But we also see that we have lots of prob­lems. People need to migrate from IPv4 to IPv6 so that every­body can indeed get an IP address, a globally-accessible and routable IP address, because many of the ser­vice providers are now giv­ing you an address behind a NAT, a net­work address trans­la­tion box. So that means there’s no good end-to-end con­nec­tiv­i­ty. And the end-to-end con­nec­tiv­i­ty allows for per­mis­sive­less inno­va­tion. That means that if you and I want to do some­thing new, we just devel­op it on our own com­put­ers and we can talk to each oth­er over the Internet because there’s no— IP is the lay­er that actu­al­ly trans­ports all our pack­ets and we can do what­ev­er we want. And that is get­ting worse and worse because of the short­age of IP address­es, because of slow­ness of migra­tion to IPv6. And so in that sense I find it a lit­tle bit worrisome.

I find it maybe stormy, even— (So that was the cloudy side.) I find its stormy even, in the sense that there are so many secu­ri­ty issues that need to be solved. How do you make sure that the new and inno­cent users can actu­al­ly use the Internet and trust that what they do is safe? It’s a mat­ter of edu­ca­tion to these peo­ple. It’s a mat­ter of get­ting more secu­ri­ty pro­to­cols and mak­ing them such that they are more easy to deploy and all that, and that’s not easy and it’s just get­ting worse. And besides that, we see things like the NSA did, the prison things, which are real­ly real­ly bad, I think.

Yeah, so that’s one fear that I have. Another fear that I have and I have also expressed last year dur­ing the Global Internet in Geneva, that is the Internet— You know, whether you go to a news web site or no mat­ter what, it is full of adver­tise­ments try­ing to take peo­ple to gam­bling sites or you know, all sorts of sites. Which I mean, some adver­tis­ing is maybe okay. And it’s flash­ing left and right. It becomes a dis­co, if you like. And maybe I’m get­ting too old, you know. I liked to go to dis­cos when I was younger, and I don’t do that that often any­more. But that’s real­ly bad. I stopped watch­ing the news pro­grams many years ago because it was all adver­tise­ment, and blah blah, and short, and repeat­ing, and what have you. And that’s what’s hap­pen­ing on Internet [?], too. So that sort of makes me makes me feel bad, and it’s just get­ting worse. That’s my fear.

So my great­est hope is that we can actu­al­ly con­vince the world that we con­tin­ue with open stan­dards. So, you may have heard about Open Stand, which I would like peo­ple to go to and find out what exact­ly we mean. And that’s open stan­dards where every­body can par­tic­i­pate to define the net­work that we want to use to com­mu­ni­cate with every­body. And Open Stand also means that you know, our prin­ci­ples say we need to adhere to the end-to-end prin­ci­ple, which means that you and I can do the things that we want to do, two oth­er peo­ple can do some­thing dif­fer­ent, and we’re not stand­ing in each oth­ers’ way.

Is there action that should be tak­en to ensure the best pos­si­ble future?

So, clear­ly there is a num­ber of actions that we need to take. They’re not easy actions. It has a lot to do in the pol­i­cy, polit­i­cal world, where there’s com­pet­ing stan­dards orga­ni­za­tions that make it dif­fi­cult to get to that open stan­dard­iza­tion process to make the whole process inclu­sive so every­body can par­tic­i­pate. It seems like there’s a lit­tle bit of a turf war there that is real­ly too bad, and we need to find a way to break that war and to make peace and work togeth­er for these open stan­dards. And that would be great if we could do that. But it’s a dif­fi­cult action. And it’s not— I don’t think it’s nec­es­sar­i­ly at the tech­ni­cal lev­el, it’s much more at the pol­i­cy lev­el these days, which is… I mean, at the tech­ni­cal lev­el, we can solve lots of things. But pol­i­cy is more difficult.

Well, let me add some­thing about the IETF. This is where…that we had last week here, where peo­ple devel­op the pro­to­cols and we should also have some fun. So, I am known in the IETF as some­times singing a song, so that’s what we should do. And it would be great if the Internet would go to the way where we could say, [sings].

That sounds like plea­sure, does­n’t it? And that’s what we need. We need plea­sure in devel­op­ing our pro­to­cols. And plea­sure in using the Internet. Which means it should be unen­cum­bered and open for every­body. Thank you.